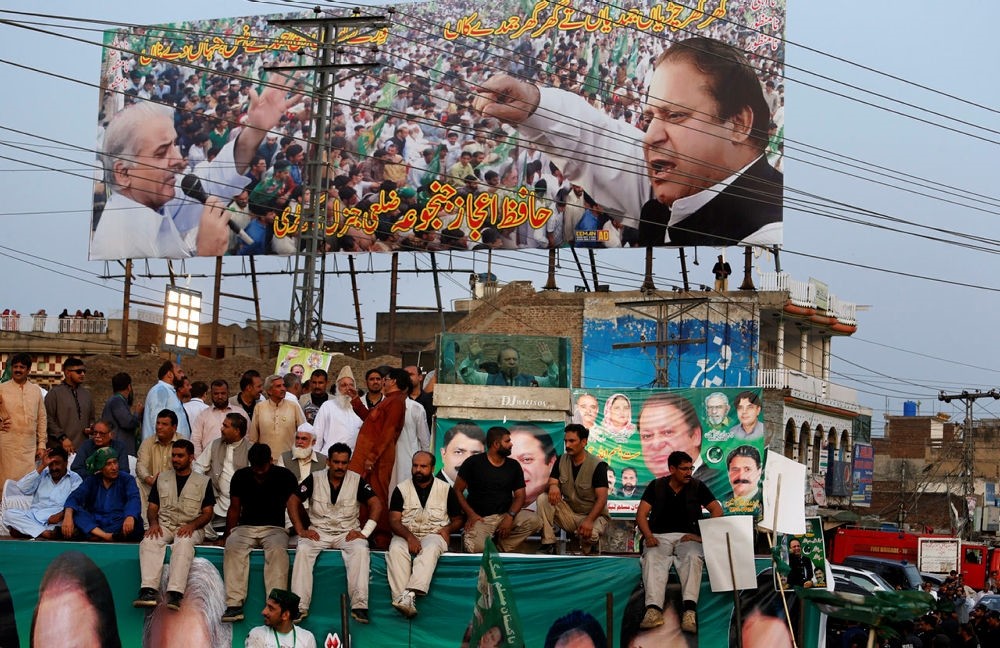 Pakistan's former Prime Minister Nawaz Sharif continued a slow, defiant procession down the ancient Grand Trunk Road Thursday, inching closer to his eastern stronghold of Lahore in a bid to rally supporters after his ouster.

Sharif halted in the Punjabi city of Jhelum for the night, where he told the swelling crowd of around 10,000 people that the Supreme Court's decision to depose him last month after a corruption probe was an "insult" to Pakistanis.

Families crowded on rooftops in Jhelum and celebratory gunshots rang out while the crowd chanted "Look who is here, the tiger is here".

Sharif, also nicknamed the Lion of Punjab, addressed the crowd from a makeshift stage behind bulletproof glass, his voice hoarse but bold as he insisted his conscience was "clean".

Thousands also lined the road to catch a glimpse of the former leader as his convoy rolled down the Grand Trunk Road, a more than 2,000-year old trade route which leads from Chittagong in Bangladesh across India and Pakistan to the Afghan capital Kabul.

Sharif is travelling in a bomb-proof vehicle especially designed for the journey, meant as a show of strength after the Supreme Court's decision has left his ruling party scrambling to replace him.

The convoy was surrounded by heavy security, with fears lingering after a truck bomb exploded in Lahore Monday, killing one person and injuring dozens.

Many lining the route had Wednesday voiced frustration with Pakistan's political elite -- but in Jhelum Thursday, Sharif found support.

"The court decision was wrong," 24-year-old Malik Arsalan told AFP, voicing his hope that the rallies would propel Sharif to power once more.

"The public is with him and we'll stay with him forever. I will vote for him my whole life," agreed 55-year-old Niaz Ahmed, from Pakistani-controlled Kashmir.

The procession moved faster Thursday than it had Wednesday, when it took 12 hours to inch just 20 kilometres (12 miles) from the capital Islamabad to neighbouring Rawalpindi.

Jhelum, roughly another 100 kilometres down the road, is still less than a third of the way to Lahore, where Sharif hopes to bring tens of thousands onto the streets. It is not clear when he will finally arrive in the Punjab provincial capital.

Sharif was the 15th prime minister in Pakistan's 70-year history -- roughly half of which has been spent under military rule -- to be ousted before completing a full term.

The top court sacked him last month after an investigation into corruption allegations against him and his family, briefly plunging the nuclear-armed nation into political uncertainty.

But fresh questions have arisen over the PML-N's original plan to eventually replace Abbasi with Sharif's younger brother, Shahbaz.

Media reports this week said the party appeared to backtrack on the plans announced by Sharif, saying the PML-N would likely keep Abbasi in place until next year's general elections.