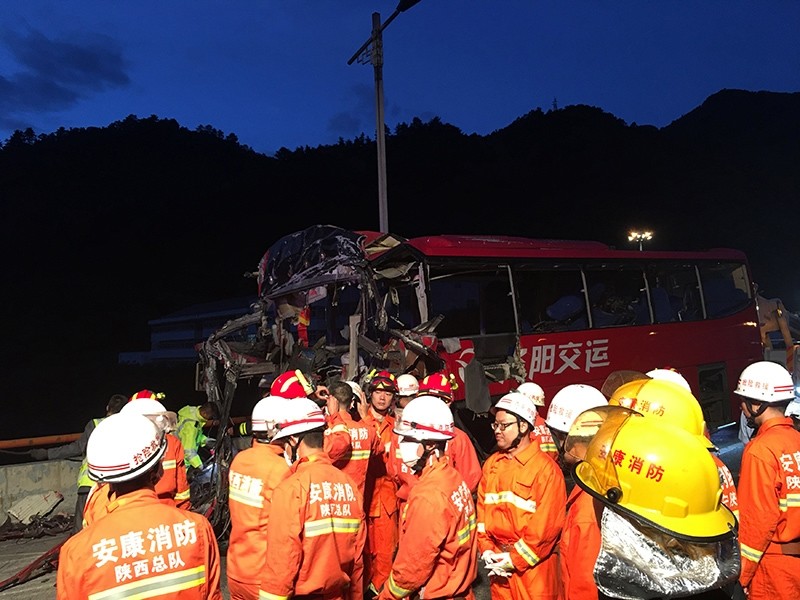 Firefighters work near the wreckage of a coach after it crashed into the wall of a tunnel along the Xi'an-Hanzhong expressway in Ankang, Shaanxi province, China, August 11, 2017. (Reuters Photo)
by Compiled from Wire Services Aug 11, 2017 12:00 am

A long-distance passenger bus crashed into the wall of an expressway tunnel in China's northwest, killing at least 36 people and injuring 13 others, official media reported Friday.

The coach crashed at the Qinling tunnel in Ankang, a city in Shaanxi province, on Thursday night, according to the State Administration of Work Safety.

Photos published by the official Xinhua news agency show the front of the red bus pushed in by the force of the crash. It was unclear if the crash occurred inside or just outside the tunnel.

The photos showed a tow truck at the scene along with rescue workers surveying the damage on the road just outside the tunnel near forested hills. Twisted metal was strewn in front of the bus, several windows were broken and a front tyre was blown out.

Such long-distance buses are a common mode of transport, particularly for migrant workers and other Chinese with low incomes.

The Xinhua News Agency and other media outlets said the bus was the only vehicle damaged, although it wasn't clear if any other vehicles were involved in causing the crash.

Two children were among those killed, and all the injured had been taken to a hospital, the reports said.

"The coach was seriously mangled," the State Administration of Work Safety said in a statement, adding the cause of the accident was under investigation.

The bus had departed from Chengdu in southwest Sichuan province en route to the central city of Luoyang.

The injured have been rushed to hospital. The bus had a 51-passenger capacity and was carrying 49 people, the statement said.

Minister of Public Security Guo Shengkun ordered a swift investigation into the accident, according to state broadcaster China Central Television.

Highway accidents are common in China because of high speeds, aggressive driving and a failure to leave adequate braking distance. The World Health Organization estimates that traffic accidents kill around 260,000 people in mainland China each year — a rate of 18.8 in every 100,000 people.