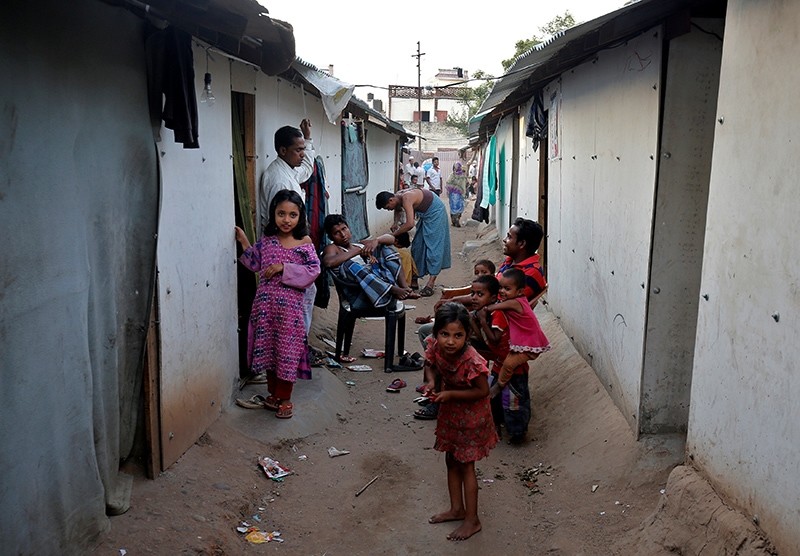 People belonging to Rohingya Muslim community sit outside their makeshift houses on the outskirts of Jammu, India, May 5, 2017. (Reuters Photo)
by reuters
Aug 11, 2017 12:00 am

India is in talks with Bangladesh and Myanmar about its plan to deport around 40,000 Rohingya Muslims it says are living in the country illegally, a government spokesman said on Friday, with state governments told to form task forces for the purpose.

Tens of thousands of Rohingya have fled persecution in Buddhist-majority Myanmar to neighboring Bangladesh since the early 1990s, with some of them then crossing over a porous border into Hindu-majority India.

New Delhi says only around 14,000 of the Rohingya living in India are registered with the UN refugee agency, making the rest illegal and liable to be sent back. India is not a signatory to UN conventions on refugees and no national law covers it.

"These things are being discussed at diplomatic level with both Bangladesh and Myanmar," Interior Ministry spokesman K.S. Dhatwalia said.

"More clarity will emerge at an appropriate time."

Rijiju was in Myanmar recently to attend an event, although it was not clear if he discussed the Rohingya issue.

Officials in Myanmar could not be contacted immediately for comment.

Amnesty International has said deporting and abandoning the Rohingya would be "unconscionable."

The Indian office of United Nations High Commissioner for Refugees said it was "trying to find the facts" about New Delhi's plans to deport them.

Rohingya are generally reviled in India, where its 1.3 billion people are fighting for resources and job opportunities. Nationalist, anti-Islamic sentiments have also fuelled hatred towards them.

More than 75,000 Rohingya have fled to Bangladesh since Oct. 9 after an insurgent group called Harakah al-Yaqin attacked Myanmar border police posts, prompting a huge security crackdown in which troops have been accused of murder and rape of Rohingya civilians.

A senior government official in Bangladesh, which has complained of being burdened by the heavy flow of refugees, said New Delhi was helping it solve the crisis.

The Rohingya in India live mainly in Jammu, Uttar Pradesh, Haryana and Delhi in the north, Hyderabad in the south, and Rajasthan in the west.

The Chamber of Commerce and Industry in Jammu, the winter capital of Jammu and Kashmir, India's only Muslim-majority state, drew widespread condemnation in April when it threatened to launch an "identify and kill movement" if the government did not deport Rohingya settlers there.