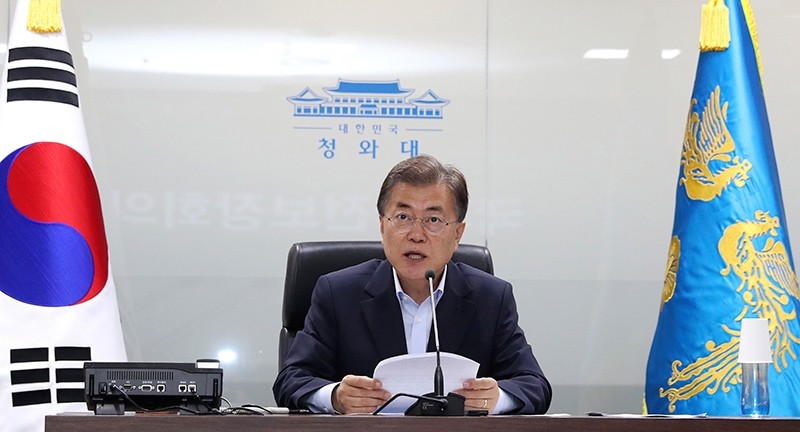 South Korea's President Moon Jae-in on Monday declared there must be no war on the Korean peninsula and called on the North to halt its threatening behavior as tensions between Pyongyang and Washington heighten with both hinting at military action.

"There must be no more war on the Korean Peninsula. Whatever ups and downs we face, the North Korean nuclear situation must be resolved peacefully," said Moon in opening remarks at a regular meeting with senior aides and advisers. The remarks were provided by the presidential Blue House.

"I am certain the United States will respond to the current situation calmly and responsibly in a stance that is equal to ours."

Trump on Thursday hardened his warning that North Korea would face "fire and fury" if it kept threatening the U.S., saying maybe that tough talk "wasn't tough enough," and Friday he issued another warning to North Korea with a reference to American weapons as being "locked and loaded."

Trump also said North Korea it should be "very, very nervous" of the consequences if it even thinks of attacking U.S. soil, after Pyongyang said it was readying plans to launch missiles towards the Pacific territory of Guam.

Pyongyang said the scheme to target the island, a key U.S. military outpost in the western Pacific, was intended to "signal a crucial warning" as "only absolute force" would have an effect on a U.S. leader "bereft of reason".