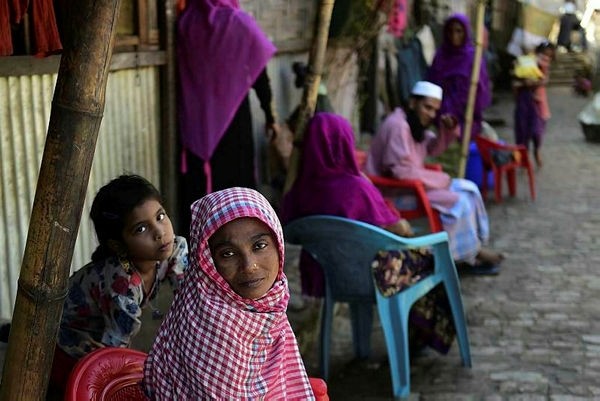 The army last Thursday dispatched a battalion of around 500 soldiers to the Maungdaw area of northern Rakhine, where Rohingya Muslims form the majority.

Hla Kyaw, chairman of the European Rohingya Council, said the troops were from the 33rd Light Infantry Division, which he described as "the most notorious military unit when it comes to the serious violation of human rights against ethnic communities."

He said the deployment was designed to establish a permanent military presence in Rakhine as well as "the advancement of Rohingya genocide."

Rising tensions were exacerbated by the killing of seven villagers in the Maungdaw area late last month.

The government blamed "extremists" for the killings and said it had found "terrorist hideouts" in the state's northern May Yu mountains.

However, Kyaw said the killings were a pretext created by "high-level military intelligence," citing unspecified sources.

"First, the military intelligence created a pretext or problems," he said. "Then the state propaganda media spread rumors that the Rohingya are involved in the killing[s]… without any evidence or proper investigation."

Tens of thousands of Rohingya have sheltered in refugee camps in Rakhine since communal violence flared in mid-2012.

The state is home to around 1.2 million Rohingya, who have long been officially labelled "Bengali" -- a term suggesting they are illegal immigrants from Bangladesh.

Despite having lived in the area for generations, Rohingya have been effectively denied citizenship by a 1982 nationality law and have restricted basic rights such as freedom of movement.

Last October, a security crackdown was launched after nine police officers were killed in Maungdaw.

In a report on the four-month operation, the UN said it had uncovered human rights violations by security forces in Rakhine that indicated crimes against humanity.

During interviews with Rohingya refugees in neighboring Bangladesh, the UN documented mass gang rape, killings, including of babies and children, brutal beatings and disappearances.

Representatives of the Rohingya minority have said approximately 400 people were slain during the operation.

The government has refused entry to a UN team probing the allegations.

"We have been documenting an extraordinary escalation of daily abuse of Rohingya by the army since the mobilization of the army," Kyaw said. He accused State Counselor Aung San Suu Kyi of complicity in abuses again Rohingya.

"Unfortunately, Aung San Suu Kyi is on board with the army in the advancement of the Rohingya genocide agenda. To make the situation worse, the West is completely silent on this matter," Kyaw said.

"We urge the EU, the UN and regional governments to pressure the Myanmar government to end the complete destruction of the Rohingya community."

At the weekend, Buddhist protests called for international aid agencies to be thrown out of Rakhine state, claiming they supported militant groups.

Last month, the World Food Program said nearly 226,000 Rohingya were on the brink of starvation.

Its report said nearly a third of the population in northern Rakhine were identified as severely food-insecure and in need of humanitarian assistance. Among them were an estimated 80,500 children under the age of five.