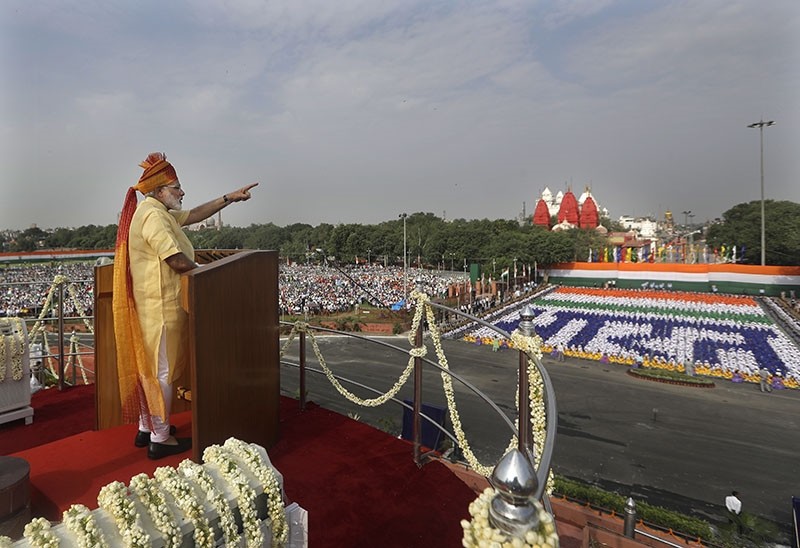 Indian PM Narendra Modi speaks on the country's Independence Day from ramparts of historical Red Fort in New Delhi, India, Aug. 15, 2017. Children stand in formation to spell out the Hindi word ,Bharat,, which is the name of the country. (AP Photo)
by Compiled from Wire Services
Aug 15, 2017 12:00 am

More than a billion Indians worldwide celebrated Independence Day on Tuesday as their country confronts several challenges on domestic and international fronts.

India faces an imploding population, widespread poverty, illiteracy and growing right-wing Hindu nationalism at home, while international ties with its neighbors, particularly China and Pakistan, are at an all-time low, threatening peace and regional security.

One of the most serious challenges are the spate of mob attacks in the name of cow protection across the country, which are on the rise at a time when the Hindu nationalist Bharatiya Janata Party (BJP) rules.

Radical Hindu organizations are now openly targeting minorities, mostly Muslims and Dalits from underprivileged sections of society, after blaming them for slaughtering cows, considered sacred in the Hindu religion.

In Tuesday's speech from the ramparts of Delhi's Red Fort marking the 70th anniversary of India's independence, Modi urged the country to reject religious violence after the attacks sparked debate about whether a surge of Hindu nationalism is undermining the country's secular ideals.

Modi has spoken out against attacks by right-wing Hindus, many of whom back his ruling BJP.

"We will not tolerate violence in the name of faith," Modi said before a teeming crowd at the fort and a huge television audience.

One of the main reasons Pakistan was created in the name of Indian Muslims on Aug. 14, 1947, at the end of 150 years of British colonial rule was the belief of its founders that a Hindu-majority India would severely disadvantage the Muslim population in all spheres of life.

Indian leaders opposed to the creation of a separate Muslim-majority state, however, had insisted that a secular Indian state would be sustainable given its centuries-old tradition of communal harmony.

Following partition, which is recognized as the largest and bloodiest migration of the last century, India was created as a separate state on Aug. 15, 1947.

Fifteen million people were uprooted from their homes and around 2 million died in communal violence or from hunger or disease. Hindus and Sikhs were forced to flee what became Pakistan while Muslims were expelled from India.

It nourished a deep-rooted mutual antipathy between the two sides that still exists today and led to two fully-fledged but inconclusive wars -- in 1948 and 1965 -- over the Muslim-majority Himalayan Kashmir valley.

The two neighbors also fought in 1971 over the secession of East Pakistan, now Bangladesh.

Another big challenge before the Indian nation is corruption.

In November 2016, the Indian government demonetized the 500 and 1,000 rupee notes that accounted for more than 86 percent of the value of cash in circulation at the time.

Modi said trillions of rupees had returned to India under his administration's crackdown on tax dodgers.

"India is celebrating honesty today. The corrupt have no place to hide anymore," he said.

More than 300,000 shell companies associated with so-called "black money" had been red-flagged and over 100,000 trading licenses revoked under a sweeping clean-out of India's graft-riddled economy, Modi added.

Unemployment is also one of the biggest problems in India. Millions of educated youth remain jobless due to lack of job-oriented education.

"He could only produce 100,000 job opportunities in one year, whereas, Congress government in the state created 30,000 public sector opportunities."

According to a UN report released in January this year, economic development is slowing down in India while social inequality and unemployment is expected to rise further in 2017.

Opposition Samajwadi Party leader Naresh Agarwal told Anadolu Agency: "No doubt India has made progress in every front in the last 70 years, but under the rule of the present BJP government we are moving towards such a situation where development has taken a back seat."

Agarwal said the government should work towards providing jobs and treating each citizen of the country equally.

However, ruling BJP leaders dismiss all criticism and believe India had seen rapid changes over the years and was in fact on its way to becoming a global superpower.

"The country is moving towards becoming a superpower. We have achieved a lot during the last 70 years. Our progress in every sphere of life cannot be undermined," Narendra Singh Tomar, central minister in Modi's Cabinet, told Anadolu Agency.

"Prime Minister Narendra Modi has travelled to the world to establish the image of India as a growing economy and has been successful in showcasing it as a destination for investors," Tomar said.

"India has been successful in eradicated various epidemics and polio in the last few years.

"Life expectancy grew to be 68 years, which was only 32 years at the time of independence."

Moreover, India's space program has been recognized as a major success.

In February, this year India became the first country to successfully launch a record-breaking 104 small-satellites along with a 714-kilogram (324-pound) satellite into orbit from a single rocket.

India also plans to create hundreds of "smart cities" and develop its manufacturing sector by asking global manufacturers to shift their bases to India and produce with local partners.

"Security is our top priority," Modi said. "Be it the sea or the borders, cyber or space -- in all spheres, India is capable and we are strong enough to overcome those who try to act against our country," the Hindu nationalist leader declared.

On the international relations front, Indo-China relations reached a nadir and no breakthrough seems to be in sight following a two-month-long standoff over Doklam at the tri-junction border between India, China and Bhutan.

The stand-off began in mid-June when India asked China to halt construction of a road in a disputed territory towards Doklam after Bhutan also objected to it.

"China wants to establish itself as a major power in this area and could not see anyone challenging its supremacy.

"This proves that India too has become powerful."

Equally volatile are India's relations with Pakistan as the condition in Kashmir continues to deteriorate.

The Kashmir issues remains a burning source of contention between Islamabad and New Delhi, with regular artillery duels and skirmishes along the Line of Control dividing the Indian and Pakistani territory.

Indian analysts believe Pakistan's policy of using terror groups as part of its alleged proxy war against India was the reason behind tensions between the neighbors.

"Pakistan needs to change its own policies otherwise it would be difficult for India to improve relationship with them," Upadhyay added.