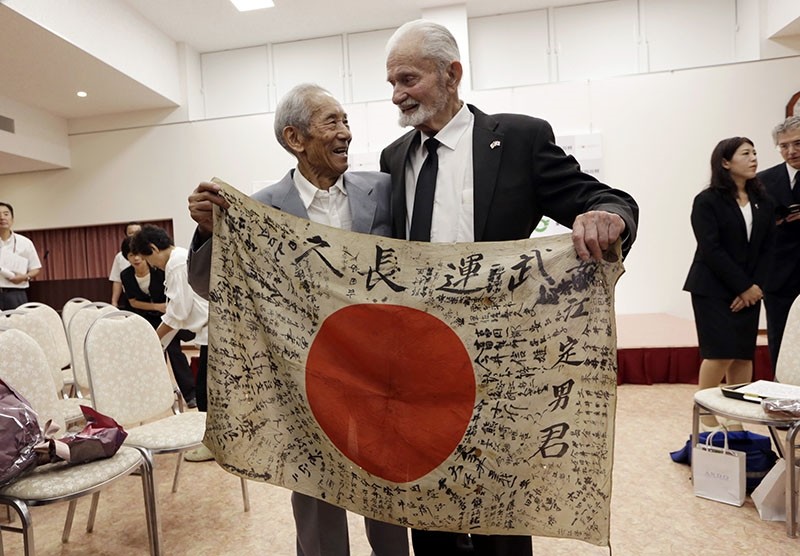 Tatsuya Yasue buried his face into the flag and smelled it. Then he held the 93-year-old hands that brought this treasure home, and kissed them.

Marvin Strombo, who had taken the calligraphy-covered Japanese flag from a dead soldier at World War II island battlefield 73 years ago, returned it Tuesday to the family of Sadao Yasue. They had never gotten his body or — until that moment — anything else of his.

Yasue and Tatsuya's sister Sayoko Furuta, 93, sitting in her wheelchair, covered her face with both hands and wept silently as Tatsuya placed the flag on her lap. Strombo reached out and gently rubbed her shoulder.

"I was so happy that I returned the flag," Strombo said. "I can see how much the flag meant to her. That almost made me cry ... It meant everything in the world to her."

The flag's white background is filled with signatures of 180 friends and neighbors in this tea-growing mountain village of Higashishirakawa, wishing Yasue's safe return. The signatures helped Strombo find its rightful owners.

"Good luck forever at the battlefield," a message on it reads. Looking at the names and their handwriting, Tatsuya Yasue clearly recalls their faces and friendship with his brother.

The smell of the flag immediately brought back childhood memories. "It smelled like my good old big brother, and it smelled like our mother's home cooking we ate together," Tatsuya Yasue said. "The flag will be our treasure."

The return of the flag brings closure, the 89-year-old farmer and younger brother of Sadeo Yasue told The Associated Press at his 400-year-old house on Monday. "It's like the war has finally ended and my brother can come out of limbo."

Tatsuya Yasue last saw his older brother alive the day before he left for the South Pacific in 1943. He and two siblings had a small send-off picnic for the oldest brother outside his military unit over sushi and Japanese sweet mochi. At the end of the meeting, his brother whispered to Tatsuya, asking him to take good care of their parents, as he would be sent to the Pacific islands, harsh battlegrounds where chances of survival were low.

A year later, Japanese authorities sent the family a wooden box with a few stones at the bottom — a substitute for his body. They knew no details of Sadeo's death until months after the war ended, when they were told he died somewhere in the Mariana Islands presumably on July 18, 1944, the day Saipan fell, at age 25.

"That's all we were told about my brother. We never knew exactly when, where or how he died," he said. The family had wondered whether he might have died at sea. About 20 years ago, Tatsuya Yasue visited Saipan with his younger brother, trying to imagine what their older brother might have gone through.

So Strombo was able to give Yasue's family not just a flag, but also some answers.

He said he found Sadeo Yasue's body on the outskirts of Garapan, a village in Saipan, when he got lost and ended up near the Japanese frontline. He told Yasue's siblings their brother likely died of a concussion from a mortar round. He told them that Sadao was lying on the ground on his left side, looking peacefully as if he was sleeping and without severe wounds.

And there is one more thing Strombo delivered: a little hope that Yasue's remains might one day be recovered, given the details about where he found the body.

The remains of nearly half of the 2.4 million Japanese war dead overseas have yet to be found. It's a pressing issue as the bereaved families reach old age and memories fade.

Allied troops frequently took the flags from the bodies of their enemies as souvenirs, as Japanese flags were quite popular and fetched good prices when auctioned, Strombo said. But to the Japanese bereaved families, they have a much deeper meaning, especially those, like Yasue, who never learned how their loved ones died and never received remains. Japanese government has requested auction sites to stop trading wartime signed flags.

Strombo said Tuesday that he originally wanted the flag as a souvenir from the war, but he felt guilty taking it, so he never sold it and vowed to one day return it.

He had the flag hung in a glass-fronted gun cabinet in his home in Montana for years, a topic of conversation for visitors. He was in the battles of Saipan, Tarawa and Tinian, which chipped away at Japan's control of islands in the Pacific and paved the way for U.S. victory.

In 2012, he was connected to the Obon Society, an Oregon-based nonprofit that helps U.S. veterans and their descendants return Japanese flags to the families of fallen soldiers. The group's research traced it to the village of 2,300 people in central Japan by analyzing family names.