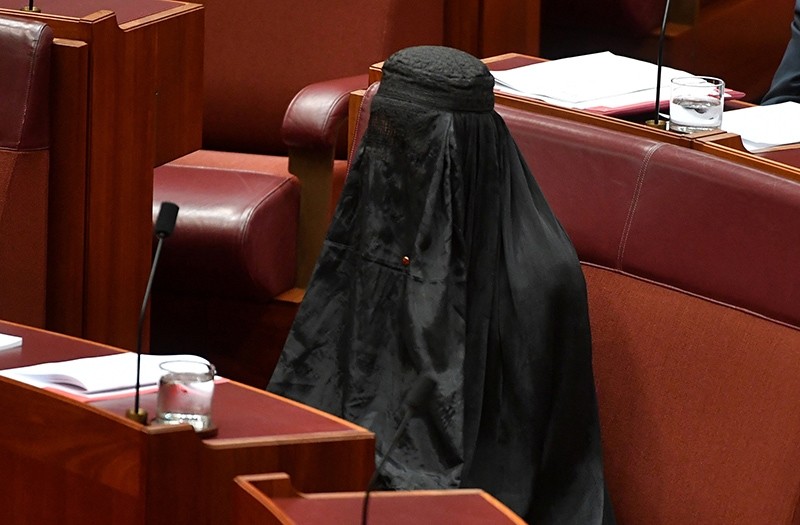 Australian One Nation party leader, Senator Pauline Hanson wears a burqa in the Senate chamber at Parliament House, a ,stunt, which drew criticism for being ,offensive,, in Canberra, Australia, August 17, 2017. (Reuters Photo)
by Daily Sabah Aug 17, 2017 12:00 am

An Australian senator provoked backlash Thursday after wearing a burqa in Parliament to promote her campaign for a national ban on full-face veils.

Pauline Hanson, leader of the anti-Muslim, anti-immigration One Nation minor party, sat wearing the black head-to-ankle garment for more than 10 minutes before taking it off, rising to explain that she wanted to ban such outfits on the grounds of national security.

Attorney-General George Brandis drew applause when he said his government would not ban the burqa, and chastised Hanson for what he described as a "stunt" that offended Australia's Muslim minority.

"We have about half a million Australians in this country of the Islamic faith, and the vast majority of them are law abiding, good Australians," Brandis said, adding that being a good law abiding Australian was "absolutely" consistent with being a strict, adherent, Muslim.

The Australian attorney-general also told Hanson that countering the risks of extremism required close cooperation with the Muslim community, a claim confirmed by national security and intelligence officials.

"To ridicule that community, to drive it into a corner, to mock its religious garments, is an appalling thing to do, and I would ask you to reflect on your behavior," Brandis added.

Following Brandis' speech, most of the Australian lawmakers gave him a standing ovation.

Many Australians and media outlets also criticized Hanson's stunt as "offensive" and "appalling."

Senate President Stephen Parry said Hanson's identity had been confirmed before she entered the chamber, undermining her argument that a ban on burqas was necessary for security.