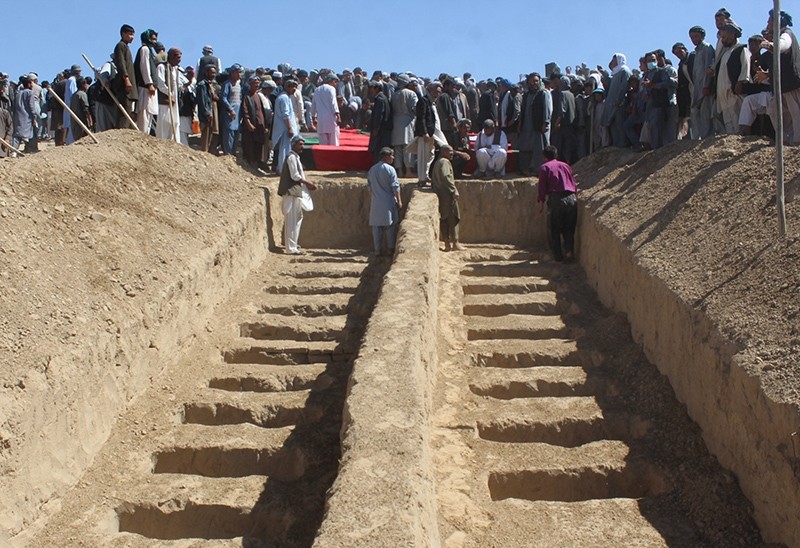 Graves are prepared for the burial of civilians, who were killed by insurgents at Mirza Olang village, in Sar-i-Pul province, Afghanistan, August 16, 2017. (Reuters Photo)
by Anadolu Agency
Aug 20, 2017 12:00 am

The U.N. mission Sunday verified allegations that the Taliban and local self-proclaimed Daesh fighters killed civilians in an attack in northern Afghanistan earlier this month.

On Aug. 3, militants stormed the Mirza Olang valley, which is located in Sar-i-Pul province and mostly inhabited by ethnic Shiite Hazara minority.
Back then, the local Afghan officials had claimed that more than 50 civilians, including women and children had been killed by the militants.

The Taliban's spokesman Qari Yosuf Ahmadi had taken responsibility for only killing "pro-government militia members" in the valley. In a statement released two weeks ago, Ahmadi rejected reports about mass civilian casualties there.

Meanwhile, Daesh also claimed responsibility for the killings. The statement released last week by the terrorist group in Arabic said 54 people were killed in Mirza Olang.

In its initial findings, the United Nations Assistance Mission in Afghanistan confirmed the killing of 36 people, but found no evidence of beheading, abduction of women and sexual violence, and allegations of sectarian hatred as a factor for the massacre.

"I condemn this blatant targeting of civilians and persons hors de combat in clear violation of international law," the secretary general's special representative for Afghanistan Tadamichi Yamamoto said, adding that perpetrators of the killings must be held accountable.

The U.N. Mission welcomed the appointment of a senior team from the Office of the Attorney General and the Ministry of Interior to investigate the attack.

Days after the massacre, the government forces took back control of the valley following a ground and air operation, officials said on Aug. 15.
Nasratullah Jamshedi, spokesman for the Afghan National Army (ANA)'s 209-Shaheen Corps, told Anadolu Agency that up to 50 Taliban militants, including a number of their top commanders, were killed and more than 20 others wounded in the operation aimed at reclaiming Mirza Olang valley.

Pro-Daesh militants in Afghanistan are mostly concentrated in eastern parts of the country bordering Pakistan's tribal areas, and in the northern provinces bordering the Central Asian states of Uzbekistan and Turkmenistan.