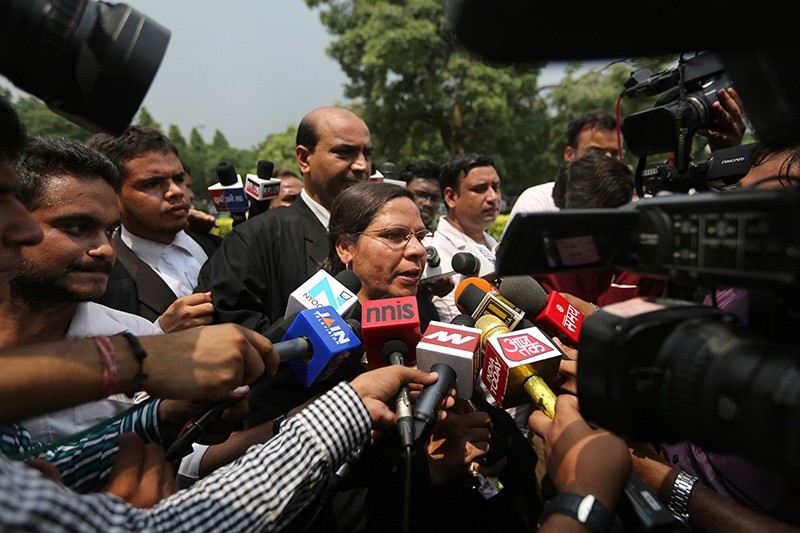 Farha Faiz, a Supreme Court lawyer, speaks to media after the apex court declared ,Triple Talaq,, a Muslim practice that allows men to instantly divorce their wives, unconstitutional in its verdict, in New Delhi, India, Aug. 22, 2017 (AP Photo)
by Compiled from Wire Services Aug 22, 2017 12:00 am

India's Supreme Court on Tuesday banned the practice of triple talaq - or instant divorce - practiced by some members of the Muslim community, petitioners in the case said.

India has so far been one of the few countries where a Muslim man could divorce his wife by saying the word 'talaq,' or 'divorce,' three times in quick succession.

Victims including Shayara Bano, whose husband used triple talaq to divorce her by letter in 2015, had approached India's highest court to ask for a ruling.

They said it was "manifestly arbitrary" to allow a man to "break down (a) marriage whimsically and capriciously."

"What is sinful under religion cannot be valid under law," said the judges.

Bano, who suffered a nervous breakdown after her divorce, said it was a "historic occasion" for Muslim women.

"I appeal to the people to not politicize this issue and accept Supreme Court's verdict on triple talaq," she told reporters outside the court.

"I have felt the pain when family breaks. I hope no one has to go through this situation in future."

India, which is officially secular, is one of the few nations that legally permitted the practice, which is banned in neighboring Bangladesh.

India allows religious institutions to govern matters of marriage, divorce and property inheritance in the multi-faith nation, enshrining triple talaq as a legal avenue for its 180 million Muslims to end unions.

But the Hindu nationalist government of Prime Minister Narendra Modi had backed the petitioners in this landmark case, declaring triple talaq unconstitutional and discriminatory against women.

Modi's ruling Bharatiya Janata Party has long pushed for a uniform civil code, governing Indians of all religions, to be enforced.

The All India Muslim Personal Law Board (AIMPLB), a grouping of Muslim organizations, had opposed any efforts to ban triple talaq.

The board said the practice was "reprehensible" but should not be a matter for the courts or the government.

Some Islamic scholars say there is no mention of instant divorce in the Quran, which instead details a different process based on mediation.

The practice had been challenged in lower courts but it was the first time India's Supreme Court had considered whether triple talaq was legal.

Muslims in India, accounting for some 14 per cent of the population of 1.25 billion, are governed by personal law, formally codified in 1937, which is loosely based on sharia, or Islamic law.