US must 'immediately correct mistake' of sanctioning firms over North Korea: China 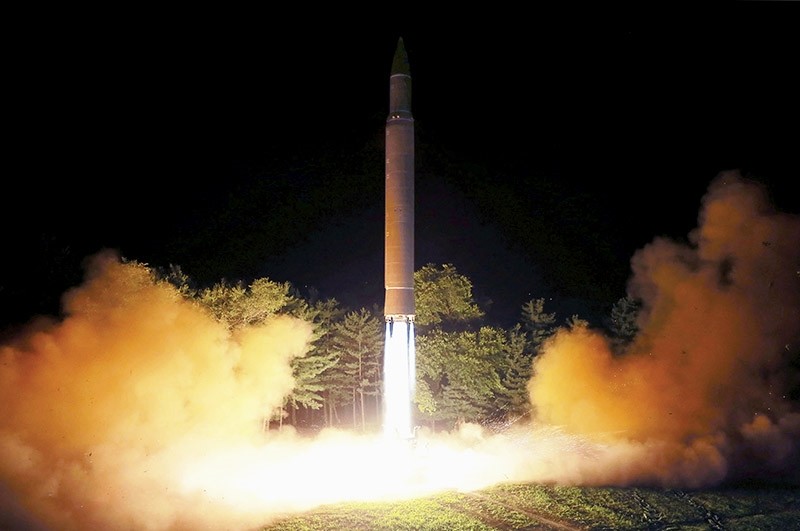 This July 28, 2017, file photo distributed by the North Korean government shows what was said to be the launch of a Hwasong-14 intercontinental ballistic missile. (AP Photo)
by Compiled from Wire Services Aug 22, 2017 12:00 am

The United States should "immediately correct its mistake" of imposing unilateral sanctions on Chinese companies and individuals to avoid damaging bilateral cooperation, a Chinese embassy spokesman said on Tuesday.

"China opposes unilateral sanctions out of the U.N. Security Council framework, especially the 'long-arm jurisdiction' over Chinese entities and individuals exercised by any country in accordance with its domestic laws," the embassy spokesman said.

"We strongly urge the U.S. to immediately correct its mistake, so as not to impact bilateral cooperation on relevant issues."

The comments come after the U.S. slapped sanctions on 16 Chinese and Russian individuals and companies, accusing them of supporting North Korea's nuclear program and attempting to evade U.S. sanctions.

The sanctions are part of a broader U.S. effort to disrupt the flow of cash funding North Korean weapon's programs and target companies that have dealt in natural resources such as coal and minerals or engaged in financial transactions for North Korean interests.

"It is unacceptable for individuals and companies in China, Russia, and elsewhere to enable North Korea to generate income used to develop weapons of mass destruction and destabilize the region," Treasury Secretary Steven Mnuchin said in a statement.

The move follows a war of words between Washington and Pyongyang over recent missile tests that show North Korea is capable of reaching the U.S. mainland.

President Donald Trump earlier this month said he would respond to North Korea's nuclear threat with "fire and fury."

Also this month, Russia and China both voted to toughen U.N. sanctions on North Korea.

Trump has urged Beijing, North Korea's only major ally, to bring greater pressure to bear in reigning in the reclusive state's nuclear efforts, suggesting that the United States may offer concessions on trade in return.

The sanctions unveiled Tuesday effectively block those targeted from accessing much of the global financial system and freeze any U.S. assets as well.

Among those hit by the sanctions was Russian national Ruben Kirakosyan and his Moscow-based company Gefest-M LLC, which the Treasury Department accuses of procuring metals for a sanctions-barred company involved in North Korea's nuclear weapons program known as Korean Tangun Trading Corp.

Federal prosecutors suspect the company may be involved in money laundering in support of Pyongyang, according to The Wall Street Journal.

The Treasury targeted three Russians -- Mikhail Pisklin, Andrey Serbin and Irina Huish -- accusing them of trading in fuel on behalf of North Korea through companies based in Singapore.

The sanctions also hit an affiliate of a Pyongyang company, Mansudae Overseas Project Group, accusing the subsidiary of exporting workers to build statues in foreign countries as a revenue source for the North.