Up to 3,000 Muslims killed in Myanmar in 3 days, European Rohingya Council says 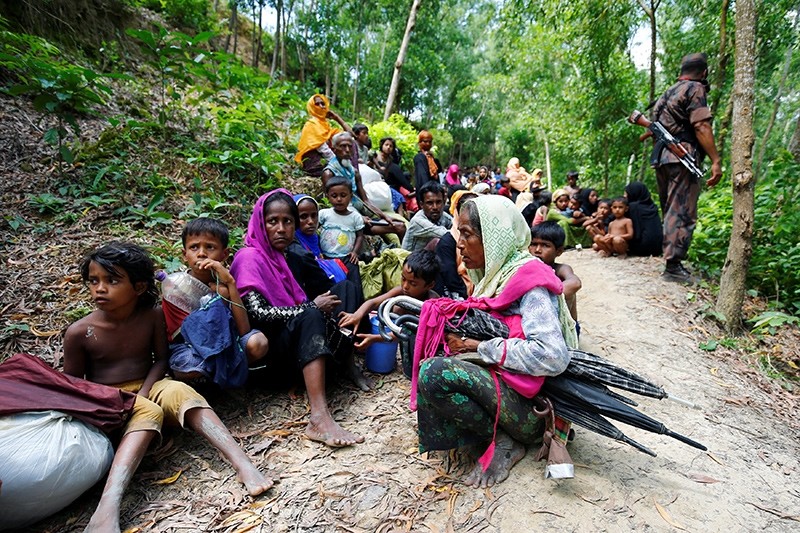 Rohingya people sits on the Bangladesh side as they are restricted by the members of Border Guards Bangladesh (BGB), to go further inside Bangladesh, in Coxu2019s Bazar, Bangladesh August 28, 2017 (Reuters Photo)
by Compiled from Wire Services Aug 28, 2017 12:00 am

Between 2,000 and 3,000 Muslims were killed in Myanmar's Rakhine state in last three days, the European Rohingya Council said Monday.

Council spokeswoman Anita Schug told Anadolu Agency between 2,000-to-3,000 Muslims had died in Rakhine state, and thousands other had been injured in what she described as a "slow-burning genocide".

"It [the situation in Rakhine] is an ongoing slow-burning genocide," Schug said, accusing Myanmar's military of being behind the deaths.

She said almost a thousand Muslims were killed on Sunday in Saugpara village, Rathedaung alone.

More than a 100,000 civilians have been displaced in Rakhine, while another 2,000 Muslims are trapped on the Myanmar-Bangladesh border which was closed by the Bangladeshi government, Schug added.

She also said a hundred villagers from Auk Nan Yar were taken to an unknown location on Wednesday, adding there were concerns for their safety.

A security clampdown launched in October last year in Maungdaw, where Rohingya form the majority, led to a U.N. report on human rights violations by security forces that indicated crimes against humanity.

The U.N. documented mass gang rape, killings, including that of babies and children, brutal beatings and disappearances. Rohingya representatives have said approximately 400 people were slain during the operation.

The Rohingya are the world's largest stateless community and of one of its most persecuted minorities.

Using a dialect similar to that spoken in Chittagong in southeast Bangladesh, the Sunni Muslims are loathed by many in majority-Buddhist Myanmar who see them as illegal immigrants and call them "Bengali" -- even though many have lived in Myanmar for generations.

They are not officially recognized as an ethnic group, partly due to a 1982 law stipulating that minorities must prove they lived in Myanmar prior to 1823 -- before the first Anglo-Burmese war -- to obtain nationality.

Most live in the impoverished western state of Rakhine but are denied citizenship and harassed by restrictions on movement and work.

Another 400,000 live in Bangladeshi camps, although Dhaka only recognizes a small portion as refugees.