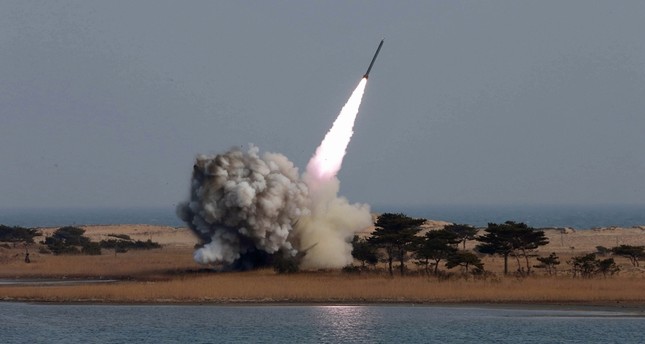 North Korea fired an unidentified projectile from its capital Pyongyang that flew over Japan, officials said, an especially aggressive test-flight that will rattle an already anxious region.

Seoul's Joint Chiefs of Staff on Tuesday said the South Korean and U.S. militaries were analyzing the launch and didn't immediately confirm how far the projectile traveled.

Japanese officials said the missile flew over the northern Japanese island of Hokkaido and landed in the Pacific Ocean and that the Japanese military did not attempt to shoot down the missile. There was no damage to ships or anything else reported. Japan's NHK TV said the missile separated into three parts.

The Japanese government's J-Alert warning system advised people in the area to take precautions, warning them to stay indoors and prepare in case of a possible missile strike.

Meanwhile, the South Korean government ordered a meeting of the National Security Council to analyze for details and discuss the steps to be taken following the launch.

South Korea's military said the projectile was fired from the Sunan region near the North Korean capital of Pyongyang just before 6 a.m. (2100 GMT Monday).

A columnist for Japan Times newspaper, Chiho Komoriya said in a tweet that the Japanese government sent a warning to mobile users. "A missile was fired from North Korea. Please evacuate to a sturdy building or basement," the message read according to the journalist.

The launch comes days after the North fired what was assessed as three short-range ballistic missiles into the sea and a month after its second flight test of an intercontinental ballistic missile, which analysts say could reach deep into the U.S. mainland when perfected.

North Korea typically reacts with anger to U.S.-South Korean military drills, which are happening now, often staging weapons tests and releasing threats to Seoul and Washington in its state-controlled media. But animosity is higher than usual following threats by U.S. President Donald Trump to unleash "fire and fury" on the North, and Pyongyang's stated plan to consider firing some of its missiles toward Guam.

Pyongyang regularly argues that the U.S.-South Korean military exercises are an invasion rehearsal. The allies say they are defensive and meant to counter North Korean aggression.

North Korea's U.N. ambassador, Ja Song Nam, wrote recently that the exercises are "provocative and aggressive" when the Korean peninsula is "like a time bomb."