Desperate Rohingyas risk all in bid to flee violence 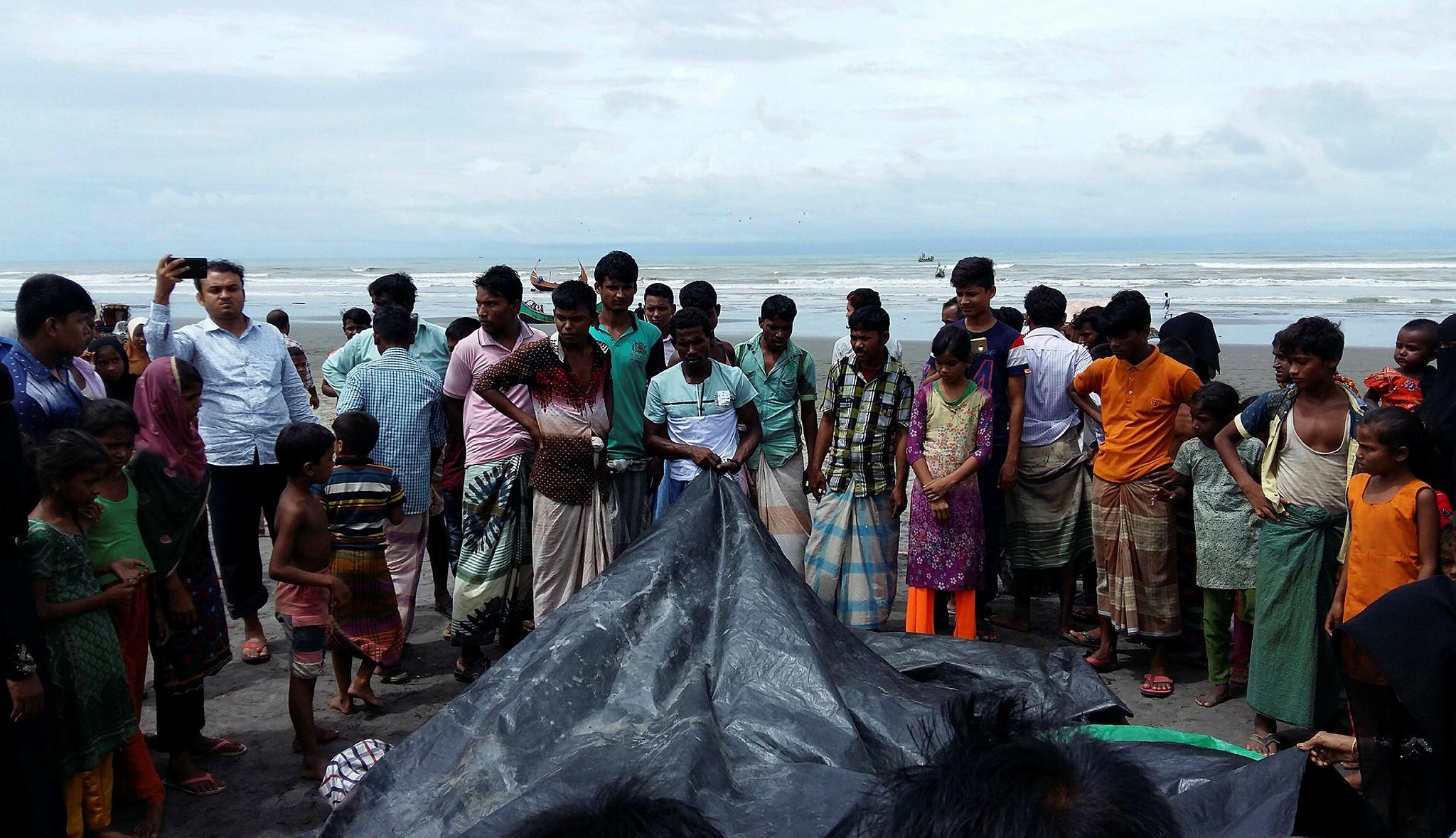 A man covers the bodies of Rohingya women and children who drowned after their boat capsized on the Naf River estuary near Teknaf, Aug. 31.
by Compiled from Wire Services Sep 01, 2017 12:00 am

Increasingly desperate to escape the violence in Myanmar, Rohingyas risk their lives on journey in rickety boats, leading to many drownings

The Bangladeshi coast guard found the bodies of 17 Rohingyas, many of them children, who drowned when their boats capsized as they fled violence in Myanmar that has forced at least 18,500 to seek refuge across the border.

Officials in Bangladesh say a growing number of Rohingyas are trying to cross the Naf River that divides the two countries in rickety boats ill-equipped for the rough waters as they become increasingly desperate to escape.

The International Organization for Migration said Wednesday that at least 18,500 Rohingyas had crossed into Bangladesh since fighting erupted in neighboring Myanmar's Rakhine state six days earlier.

One coast guard official who asked not to be named said the migrants were traveling in "rickety inland fishing boats" unsuitable for the choppy seas around Bangladesh.

On Wednesday, the bodies of two women and two children washed up in Bangladesh after their boat capsized. Officials said two more boats capsized on Thursday, killing at least 17 people, many of them children.

The treatment of about 1.1 million Rohingyas in Myanmar is the biggest challenge facing national leader Aung San Suu Kyi, who has been accused by Western critics of not speaking out for a minority that has long complained of persecution.

Violence erupted in Myanmar's Rakhine state on Aug. 25, when the country's security forces launched an operation against the Muslim Rohingya community. It triggered a fresh influx of refugees toward neighboring Bangladesh, although the country sealed off its border to refugees.

Over 10,000 of Rohingyas, mostly women, children and the elderly, were waiting in no man's land along the border to enter Bangladesh, Bangladeshi media reported citing an official from the Border Guard Bangladesh (BGB).

Meanwhile, more than 10,000 Rohingyas have already managed to get into Bangladesh through several points of the 274 kilometer Bangladeshi-Myanmar border, according to the Daily Star.

A security clampdown launched in October last year in Maungdaw, where Rohingyas form the majority, led to a U.N. report on human rights violations by security forces that indicated crimes against humanity.

Tens of thousands of Rohingyas have sheltered in refugee camps in Rakhine since communal violence flared in mid-2012. The state is home to around 1.2 million Rohingyas, who have long been officially labelled Bengali, suggesting they are illegal immigrants from Bangladesh. Despite having lived in the area for generations, Rohingyas were effectively denied citizenship with a 1982 nationality law and have restricted basic rights such as freedom of movement. According to the law, foreigners cannot become naturalized citizens of Myanmar unless they can prove a close familial connection to the country.