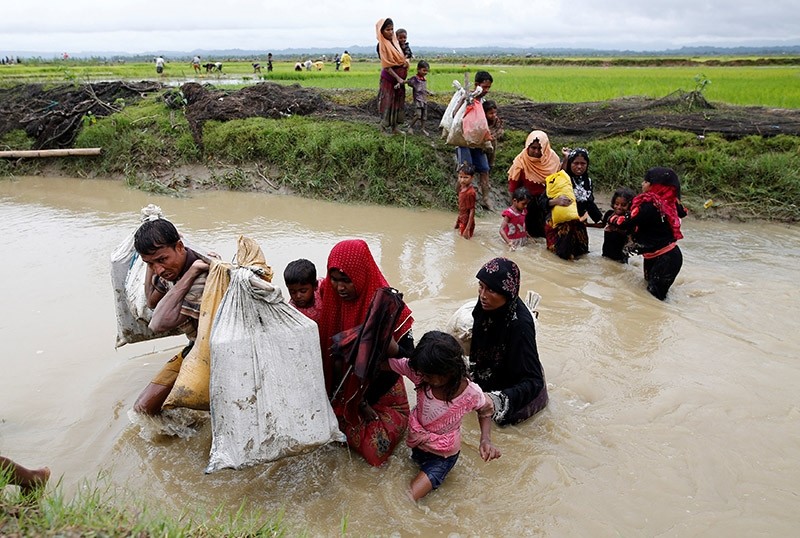 A group of Rohingya refugee people cross a canal as they walk towards Bangladesh after crossing the Bangladesh-Myanmar border in Teknaf, Bangladesh, September 1, 2017. (Reuters Photo)
by Sep 01, 2017 12:00 am

U.N. Secretary-General Antonio Guterres warned Friday of a looming humanitarian catastrophe in western Myanmar and urged the country's security forces to show restraint after 400 people -- most of them Rohingya Muslims -- died in communal violence.

"The secretary-general is deeply concerned by the reports of excesses during the security operations conducted by Myanmar's security forces in Rakhine State and urges restraint and calm to avoid a humanitarian catastrophe," said a U.N. spokesman.

The violence has sent tens of thousands of Rohingya fleeing across the border into Bangladesh, while scores of desperate people have drowned trying to cross a border river in makeshift boats.

Reports of massacres and the systematic torching of villages by security forces -- as well as by militants -- have raised fears that the violence in Rakhine is spinning out of control.

Guterres recalled that it was the government's responsibility to provide security and allow aid agencies to reach those in need.

On Tuesday, U.S. Ambassador to the United Nations Nikki Haley told Myanmar that its security forces must refrain from attacking civilians and aid workers in its response to attacks by Rohingya militants in Rakhine State.

The U.N. Security Council met behind closed doors on Wednesday to discuss the violence, but there was no formal statement on the crisis.