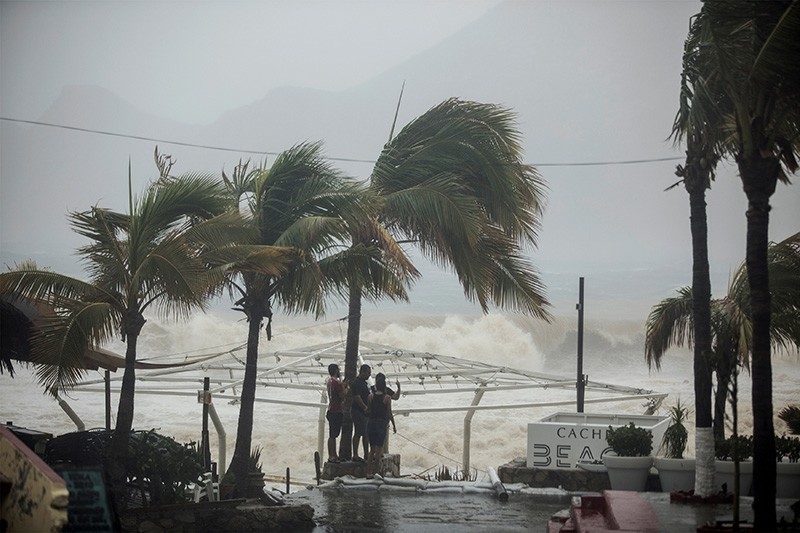 Lidia's maximum sustained winds dropped to 40 mph (65 kph), just above the minimum threshold for a tropical storm, as its center passed over a sparsely populated area of the peninsula that is home to a large nature reserve and back out over Pacific waters. It was forecast to lose more strength over the course of the day.

Authorities have said the death toll could rise over the weekend as emergency crews surveyed the damage in villages with ramshackle homes. One person was considered missing and video broadcast on local networks showed vehicles being swept away by flooded rivers.

Baja California Sur Gov. Carlos Mendoza reported that Lidia had dumped about 27 inches (700 millimeters) of rain, "the largest amount of water we have had since 1933."

The dead included two people electrocuted by power lines, a woman drowned after being swept away by water on a flooded street and a baby was ripped from its mother's arms as she crossed a flooded area. Mendoza said late Friday that there was a fifth victim but did not give details.

About 1,400 people had sought refuge at storm shelters as the storm flooded streets and stranded tourists.

The storm was centered about 75 miles (120 kilometers) north of Punta Eugenia on Saturday evening and was heading northwest at about 10 mph (17 kph).

In Mexico City, a huge downpour caused by Lidia forced the international airport to cancel 18 flights and divert 40 arriving planes on Wednesday night -- including one carrying Nobel Peace Prize winner Malala Yousafzai, who was on her way to give a speech but found herself temporarily diverted to Cancun, some 1,600 kilometers (1,000 miles) away.

On Thursday, the rains triggered a large cave-in on a central street in the capital, opening a gaping hole at least 10 meters (33 feet) wide and seven meters deep.

The hurricane center forecast that some of the storm's tropical moisture would affect the U.S. desert Southwest over the Labor Day weekend, including parts of western Arizona, southern California and southern Nevada, in the form of scattered showers and thunderstorms.

Far out over the Atlantic, meanwhile, Hurricane Irma was following a course that could bring it near the eastern Caribbean Sea next week. It had maximum sustained winds near 110 mph (175 kph) and was moving west at 15 mph (24 kph).

There was no immediate threat to land, and no coastal watches or warnings were in effect.