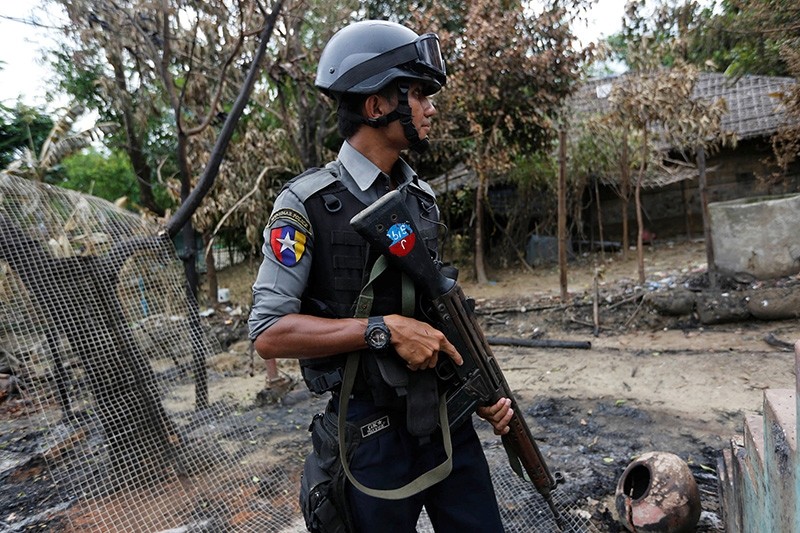 A police officer guards near a house which was burnt down during the last days of violence in Maungdaw, northern Rakhine State, Myanmar Aug. 30, 2017. (Reuters Photo)
by Compiled from Wire Services Sep 02, 2017 12:00 am

Almost 400 people have died in violence and more than 2,600 houses have been burned down in Rohingya-majority areas of Myanmar's northwest in the last week, the government said on Saturday, in one of the deadliest bouts of violence involving the Muslim minority in decades.

About 58,600 Rohingya have fled into neighboring Bangladesh from Myanmar, according to U.N. refugee agency UNHCR, as aid workers there struggle to cope.

Myanmar officials blamed the Arakan Rohingya Salvation Army (ARSA) for the burning of the homes. The group claimed responsibility for coordinated attacks on security posts last week that prompted clashes and a large army counter-offensive.

But Rohingya fleeing to Bangladesh say a campaign of arson and killings by the Myanmar army is aimed at trying to force them out.

The treatment of Buddhist-majority Myanmar's roughly 1.1 million Rohingya is the biggest challenge facing leader Aung San Suu Kyi, accused by Western critics of not speaking out for a minority that has long complained of persecution, with the government refusing to recognize them as a legitimate native ethnic minority, leaving them without citizenship and basic rights.

The clashes and army crackdown have killed nearly 400 people and more than 11,700 "ethnic residents" have been evacuated from the area, the government said, referring to the non-Muslim population of northern Rakhine.

The death toll, posted on the Facebook page of Myanmar's military commander Friday, is a sharp increase over the previously reported number of just over 100. The statement said all but 29 of the 399 dead were insurgents.

The statement said there had been 90 armed clashes, including an initial 30 attacks by insurgents on Aug. 25, making the combat more extensive than previously announced. The army, responding to the attacks, launched what it called clearance operations against the insurgents.

Advocates for the Rohingya, an oppressed Muslim minority in overwhelmingly Buddhist Myanmar, say security forces and vigilantes attacked and burned villages, shooting civilians and causing others to flee. Hundreds of civilians were killed, they say, posting photos, videos and details on social media as evidence.

It marks a dramatic escalation of a conflict that has simmered since October, when similar but much smaller Rohingya attacks on security posts prompted a brutal military response dogged by allegations of rights abuses.

"A total of 2,625 houses from Kotankauk, Myinlut and Kyikanpyin villages and two wards in Maungtaw were burned down by the ARSA extremist terrorists," the state-run Global New Light of Myanmar said on Saturday. The group has been declared a terrorist organization by Myanmar government.

"New satellite imagery shows the total destruction of a Muslim village, and prompts serious concerns that the level of devastation in northern Rakhine state may be far worse than originally thought," said the group's deputy Asia director, Phil Robertson.

Near the Naf River separating Myanmar and Bangladesh on Saturday, new arrivals in Bangladesh carrying their belongings in sacks were setting up crude shelters or trying to squeeze into available shelters or homes of local residents.

"The existing camps are near full capacity and numbers are swelling fast. In the coming days there needs to be more space," said UNHCR regional spokeswoman Vivian Tan, adding that more refugees were expected.

The Rohingya are denied citizenship in Myanmar and regarded as illegal immigrants, despite claiming roots that date back centuries. Bangladesh is also growing increasingly hostile to Rohingya, more than 400,000 of whom live in the poor South Asian country after fleeing Myanmar since the early 1990s.

Jalal Ahmed, 60, who arrived in Bangladesh on Friday with a group of about 3,000 after walking from Kyikanpyin for almost a week, said he believed the Rohingya were being pushed out of Myanmar.

"The military came with 200 people to the village and started fires... All the houses in my village are already destroyed. If we go back there and the army sees us, they will shoot," he said.

Among those fleeing the violence was Sham Shu Hoque, 34, who crossed the border with 17 family members. He said he left his village of Ngan Chaung on Aug. 25 after it was attacked by Myanmar security forces who shot at the villagers. He said troops also used rocket-propelled grenades, and helicopters fired some sort of incendiary device.

Five people were killed in front of his house, he said. His family survived the attack but was told by the soldiers to leave. They took a week to reach Bangladesh, hiding in villages along the way, he said.

Bangladeshi border guards have tried to keep them out, but usually relent when pressured, and thousands could be seen Friday making their way across muddy rice fields. Young people helped carry the elderly, some on makeshift stretchers, and children carried newborns.

Some, carrying bundles of clothes, cooking utensils and small solar panels, said they had walked at least three days to get to the border.

It is nearly impossible to verify information issued by either the government or Rohingya sympathizers because Myanmar has barred most journalists from the area, except on limited official guided tours.

"Survivors and eyewitnesses from Chut Pyin told Fortify Rights that soldiers and armed residents burned every house in the village," the group said in a statement. It said survivors who returned to the village after the attackers left estimated the death toll there to be more than 200.

It quoted a 41-year-old survivor identified by the pseudonym "Abdul Rahman" as saying that soldiers killed and burned his brother along with other victims.

"We found (my other family members) in the fields," it quoted him as saying. "They had marks on their bodies from bullets and some had cuts. My two nephews, their heads were off. One was 6 years old and the other was 9 years old. My sister-in-law was shot with a gun."

Government accusations of atrocities committed by the insurgents are less detailed.

"Some of the ethnic natives while on their way were brutally butchered by the terrorists applying inhuman ways without any reason," Friday's military statement said. It said the insurgents were "using various terrorism tactics under well-hatched plots, attacking security forces on duty with superior force, mingling with villagers after running away from security forces in hot pursuit of them, cutting off communication lines, and spreading false information to get outside help."