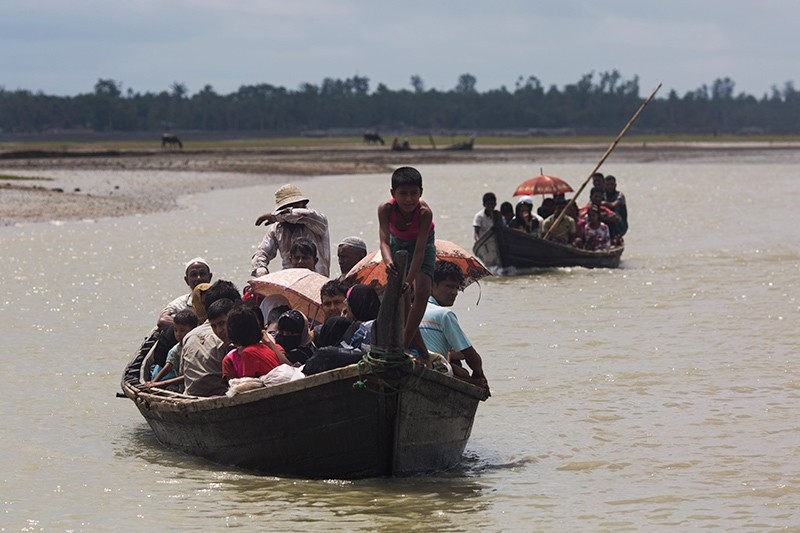 Myanmar's Rohingya Muslim minority use a local boat to cross a stream after crossing over to the Bangladesh side of the border near Cox's Bazar's Dakhinpara area, Sept. 2, 2017. (AP Photo)
by Daily Sabah with DPA Sep 03, 2017 12:00 am

"Hundreds of people displaced by the violence are still crossing into Bangladesh. An estimated 73,000 people have entered into Bangladesh as of Sunday morning," Joseph Tripura, spokesman for the United Nations High Commission for Refugees in Dhaka, told DPA.

The estimate is based on witnesses' accounts and reports by the local and international non-governmental organizations working for the Rohingya refugees in south-eastern Bangladeshi district of Cox's Bazar bordering Rakhine State, he said.

The deaths of nearly 400 people in violence against Rohingya people by Myanmarese security forces on Aug. 25 forced the minority Muslims to cross in their thousands to neighboring Bangladesh for safety.

Many others have been trapped in the border between the two countries awaiting shelter, food and security. Dozens have died trying to cross a river into Bangladesh in an effort to escape the unrest.

The refugees said that the security forces carried out attacks on civilians, torched their homes and drive them out of Rakhine.

The UNHCR official said local volunteers were trying to reach the displaced people with emergency support.

"Many of (the Rohingya refugees) were provided with temporary shelters at school buildings and community centers," Tripura said, adding that a full-fledged need assessment for the newly landed refugees would take a great deal of time to prepare as the migrant inflow is continuing unabated.

Speaking at a Qurban Bayram (Feast of Sacrifice), also known as Eid al-Adha, celebration event in the Mediterranean province of Antalya on Friday, Çavuşoğlu reiterated Turkey's call to Bangladesh to open its doors to Rohingya people, and said that Turkey would pay all the expenses.