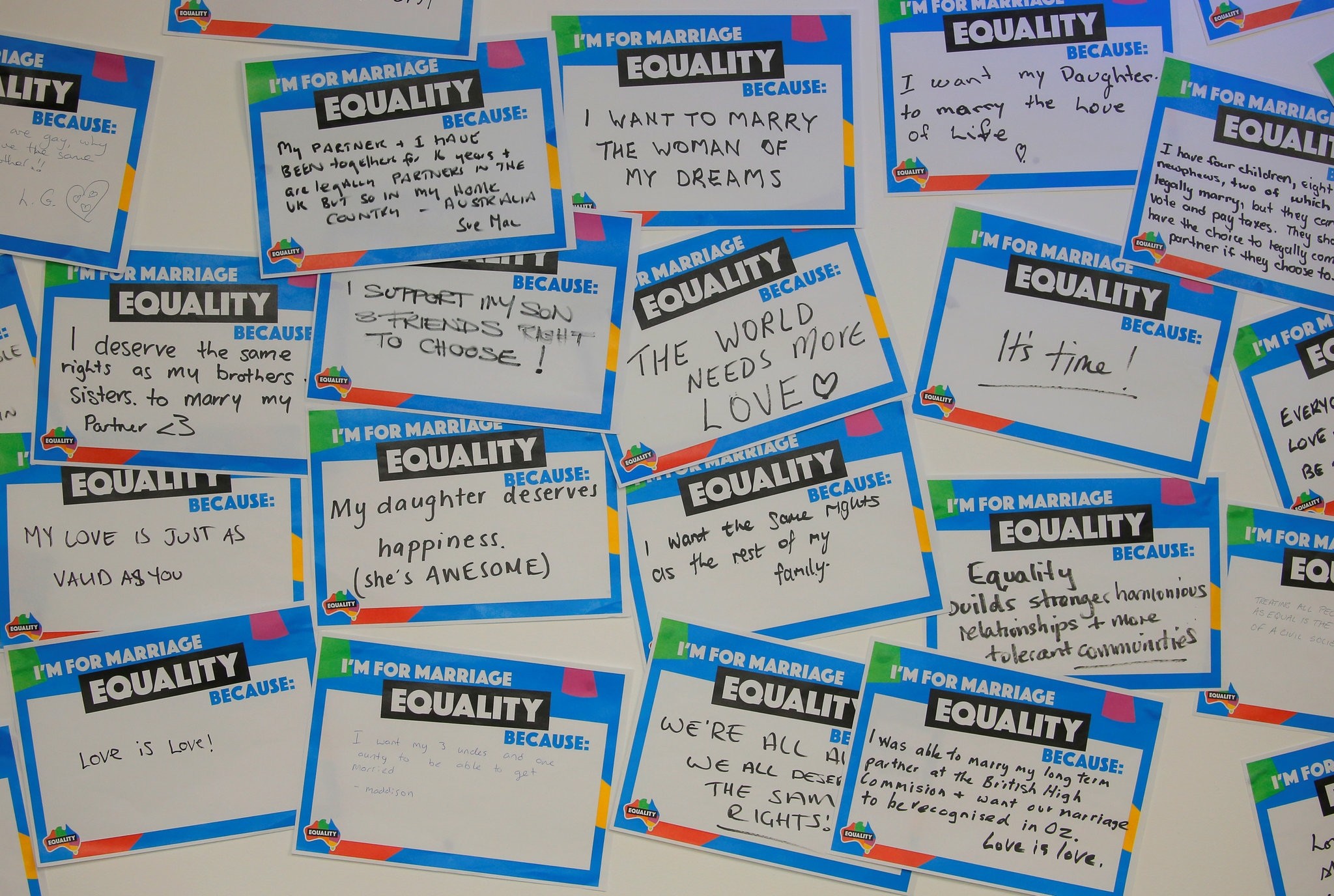 Hand-written messages expressing support for same-sex marriage in Australia line a wall at a call centre for the Yes campaign in Australia's gay marriage vote in Sydney, Australia, September 6, 2017. (Reuters Photo)
by Compiled from Wire Services
Sep 07, 2017 12:00 am

Australians will be surveyed on their support for gay marriage from next week after the nation's highest court on Thursday dismissed challenges to the government's power to conduct the postal ballot without Senate permission.

Gay marriage could be legal in Australia by December if most Australians who take part in the ballot support the reform. But the lawmakers who could finally change the law within three weeks of the survey results becoming known would not be bound to accept the people's will.

Gay rights advocates argued in an emergency hearing in the High Court that the government did not have the constitutional power to survey the public through a unique 122 million Australian dollar ($97 million) postal ballot.

The seven judges dismissed both cases argued by separate groups of rights advocates.

The government had already gone to the expense of starting to print the ballot papers, which are to be posted to more than 16 million voters nationwide from Tuesday.

Prime Minister Malcolm Turnbull welcomed the ruling and urged all Australians to take part in the survey, which will be declared on Nov. 15.

Opinion polls show that most Australians want same-sex marriage legalized, but many advocates question how representative of Australian attitudes the postal survey would be.

The voluntary postal vote was strongly opposed by many gay marriage supporters, who said it would be expensive and divisive, subjecting gay people and their families to hate speech.

Ahead of the court's decision, there were early signs the debate could turn toxic, with a poster emblazoned "stop the fags" put up in central Melbourne.

There were also flyers describing homosexuality as "a curse of death" distributed in suburban Sydney, sparking calls by the government for a respectful debate.

The government said safeguards would now be introduced via legislation to "support the fair and proper conduct" of the survey, which could include tighter advertising restrictions.

Australia's highest-profile gay politician, Labor opposition Senator Penny Wong, opposed the ballot along with her party but said it was time to make marriage equality a reality.

"We didn't want to be here but now we are here, let's win it. Let's get it done," Wong told reporters.

A leading group behind the "yes" vote, The Equality Campaign, said it would be "hitting the ground running with hundreds of thousands of supporters talking about why marriage equality matters".

Meanwhile, a key voice backing the "no" vote, the Australian Christian Lobby (ACL), said it would continue its campaign to inform Australians about the "consequences of changing the Marriage Act for them and their family".

This would include what ACL's managing director Lyle Shelton said would be the impact of the reforms on religious freedom and the rights of parents on whether their children would be taught "radical" gay programs in schools.

Archbishop of Sydney Anthony Fisher said in a post on his archdiocese's website that the push for marriage reforms raised key questions for Australian Catholics.

"If the law is changed, will Catholic parishes, schools, hospitals and welfare agencies still be free to employ lay people who profess our values?," he asked.