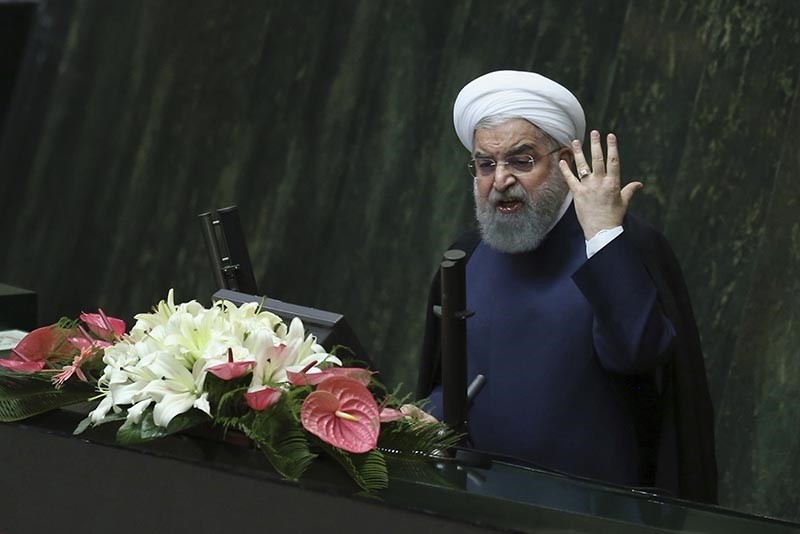 Iranian President Hassan Rouhani speaks at a session of parliament before a vote of confidence for his cabinet, in Tehran, Iran, Sunday, Aug. 20, 2017 (AP Photo)
by Daily Sabah with AFP Sep 07, 2017 12:00 am

Iran's President Hassan Rouhani said Wednesday that threats by the United States had pushed North Korea to test nuclear weapons and were a "dangerous game for the entire world."

"Why has North Korea chosen this path today which has worried people in East Asia? It is because of threats against North Korea's existence," Rouhani said in a speech to his cabinet shown on state television.

"Can one joke around with atomic weapons? When a country has obtained an atomic weapon, then the game of threatening them becomes a dangerous game for the entire world," he added.

"We believe this issue must be resolved through negotiations and dialogue."

North Korea conducted a sixth nuclear test at the weekend, saying it was a hydrogen bomb that could be fitted onto a missile, prompting the U.S. to accuse the isolated nation of "begging for war".

Rouhani said U.S. officials needed to tone down their rhetoric.

"Leave them be. Don't threaten North Korea so much, and she will pursue her life and that of her people," he said.

He also criticized Iran's southern neighbors, -in an indirect reference to Saudi Arabia- for buying weapons from the U.S.

"Why do our southern neighbors keep buying weapons from the west and start arms race in the region?" Rohani said, adding that the weapons are not bought to fight Israel, which he called "the real enemy."