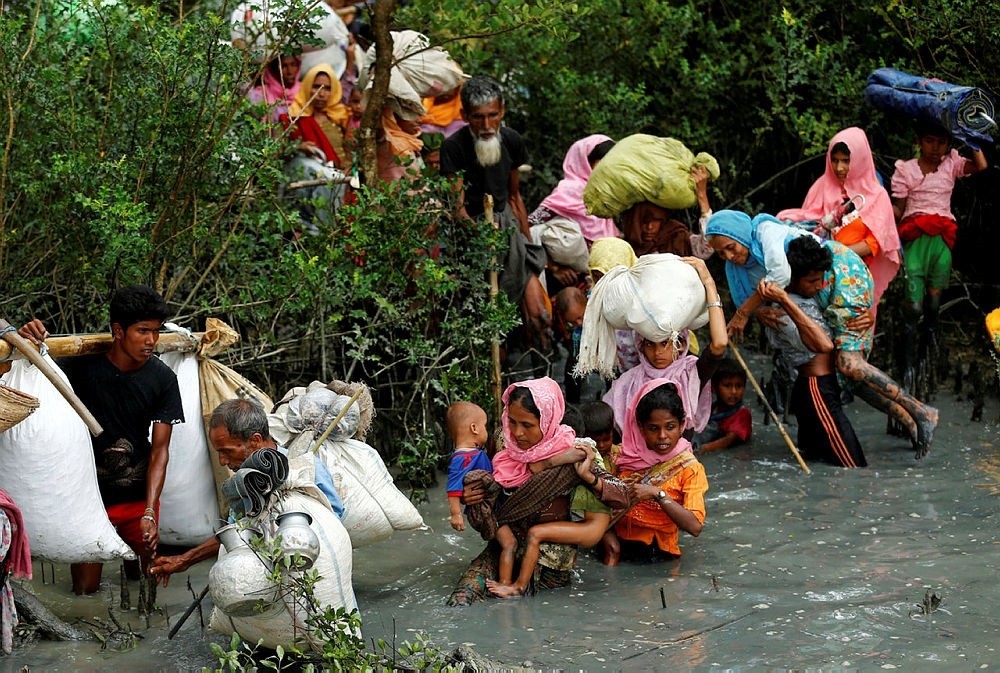 Rohingya refugees walk through water after crossing border by boat through the Naf River in Teknaf, Bangladesh, September 7, 2017. (REUTERS Photo)
by Daily Sabah Sep 07, 2017 12:00 am

An influential group of Islamic scholars Thursday said Muslims were obliged to help Rohingya Muslims fleeing violence in Myanmar's Rakhine state within their abilities and called upon Muslim countries to impose boycott against Myanmar.

In a statement, the International Union of Muslim scholars (IUMS) based in Doha, asked leaders to make political efforts to protect Rohingya and for relief agencies to provide aid to the persecuted minority in Myanmar.

The IUMS, comprising senior Sunni religious scholars from around the world, said that all mosques needed to discuss the matter during their weekly sermons at Friday prayers tomorrow.

"The situation in Arakan [Rakhine state] is shameful to the whole world and its governments, institutions, politicians, intellectuals, and scholars. Thousands of people are being killed and displaced and nobody cries for them," Secretary General Sheikh Ali al-Qaradaghi said.

According to the UN, 164,000 Rohingya have crossed into Bangladesh, as tens of thousands more were internally displaced by the latest rounds of violence.

Rakhine state has witnessed simmering tension between its Buddhist and Muslim populations since communal violence broke out in 2012.

In a security crackdown launched last October in the state's northern Maungdaw district, the UN documented mass gang rapes, killings – including of infants and young children -- brutal beatings, and disappearances.

The report found evidence of human rights violations by security forces that indicated crimes against humanity.

Rohingya representatives said around 400 people had been killed in the crackdown.

In recent weeks, the government has boosted its military numbers in Maungdaw, and the Arakan Rohingya Salvation Army (ARSA) claimed responsibility for attacks in which the government said dozens were killed.

The ARSA said the attacks were in response to raids, killings, and looting by soldiers.