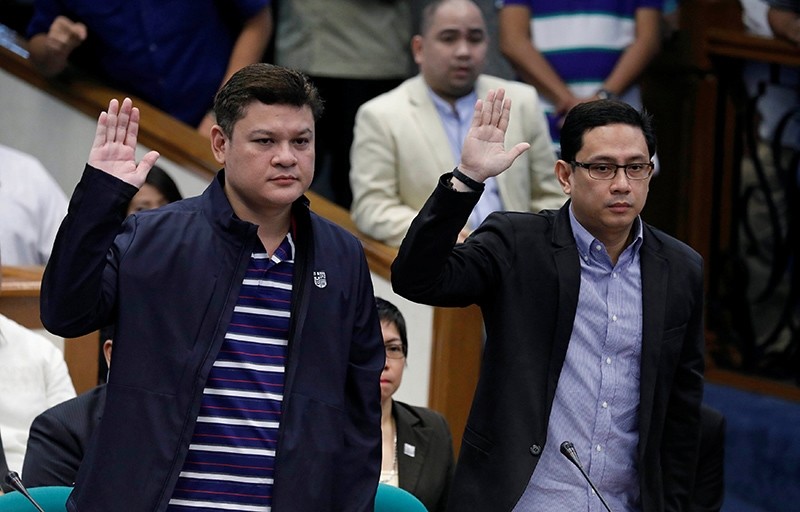 The Philippine president's son and son-in-law appeared for the first time Thursday in a Senate committee inquiry looking into a huge shipment of illegal drugs from China worth $125 million that slipped through Manila's port and rampant corruption at the Bureau of Customs.

Paolo Duterte, currently vice mayor of southern Davao city, and lawyer Manases Carpio have not been directly implicated in the drug shipment. The two were invited to appear in the Senate hearing after they were mentioned as belonging to an influential group that receives bribes from smugglers operating in Manila and elsewhere.

They denied any wrongdoing. The president has urged them to attend the televised hearing, denying insinuations of corruption against them by opposition Sen. Antonio Trillanes IV.

The allegations would likely further infuriate the tough-talking president, who has been accused of condoning extrajudicial killings of thousands of suspects in his deadly crackdown against illegal drugs. He said over the weekend that Trillanes has been trying to undermine him and his family with baseless allegations, calling the senator a "political ISIS" who aims to destroy him but could not offer any shred of evidence.

"Once and for all, I now have the time to deny any and all baseless allegations thrown against me," Paolo Duterte told the senators.

He said a senator, whom he did identify, has accused the Dutertes of being "a family of murderers and I am untouchable." He added without elaborating that "every talk has its day ... the law of karma will operate specially to those with evil intent."

Carpio, the husband of Sara Duterte, currently the Davao city mayor, said he and his brother-in-law "have been publicly crucified based on rumors and gossips."

At the height of the Senate inquiry, Trillanes accused Paolo Duterte of being a member of the Chinese triad, an organized crime group, citing intelligence information he said was provided by a foreign government. The young Duterte, Trillanes alleged, has a tattoo at the back that is the mark of a triad gang member.

Paolo Duterte acknowledged he has a tattoo during questionings by Trillanes but refused to show it, citing his right to privacy.

Trillanes also said he has information that the two have separate bank accounts with huge cash deposits. The two refused to a sign waivers for Trillanes to investigate the alleged bank accounts.