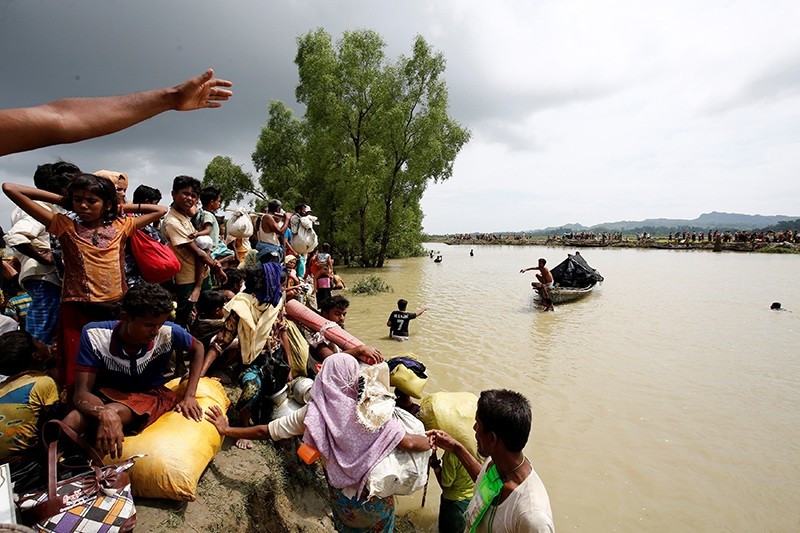 An international human rights group called on the U.N. Security Council on Friday to hold an emergency meeting on Myanmar's crackdown on Rohingya Muslims.

According to the U.N. and rights groups, over the past two weeks military operations have forced 164,000 Rohingya villagers to flee across the border to neighboring Bangladesh from Rakhine state.

New York-based Human Rights Watch (HRW) said that it has interviewed 50 Rohingya refugees recently arrived in Bangladesh who described killings, shelling and arson in their villages, which have all the hallmarks of a campaign of ethnic cleansing.

"Lawful operations against armed groups do not involve burning the local population out of their homes."

The group said its initial findings of the situation in the Maungdaw area of Rakhine were indicative of an ethnic cleansing campaign.

It called on the U.N. Security Council to hold a public emergency meeting and warn Myanmar's government that it would face severe sanctions unless the campaign against the Rohingya is halted.

"The United Nations and concerned governments need to press Burma right now to end these horrific abuses against the Rohingya as a first step toward restoring Rohingya to their homes," Ganguly said.

Myanmar said Wednesday it was negotiating with China and Russia, both permanent members of the Security Council, to ensure they block any U.N. Security Council censure over the violence that has forced an exodus of tens of thousands Rohingya Muslims to Bangladesh in less than two weeks.

Meanwhile, President Recep Tayyip Erdoğan has promised to raise the issue of the plight of the Rohingya at the U.N. General Assembly on Sept. 19.

Last October, following attacks on border posts in Maungdaw, Myanmar security forces launched a five-month crackdown in which, according to Rohingya groups, around 400 people were killed.

Before the fresh operation, the military had boosted its presence in Maungdaw after a wave of deadly attacks claimed by the Arakan Rohingya Salvation Army, which said it had acted in response to raids, killings and looting by soldiers.