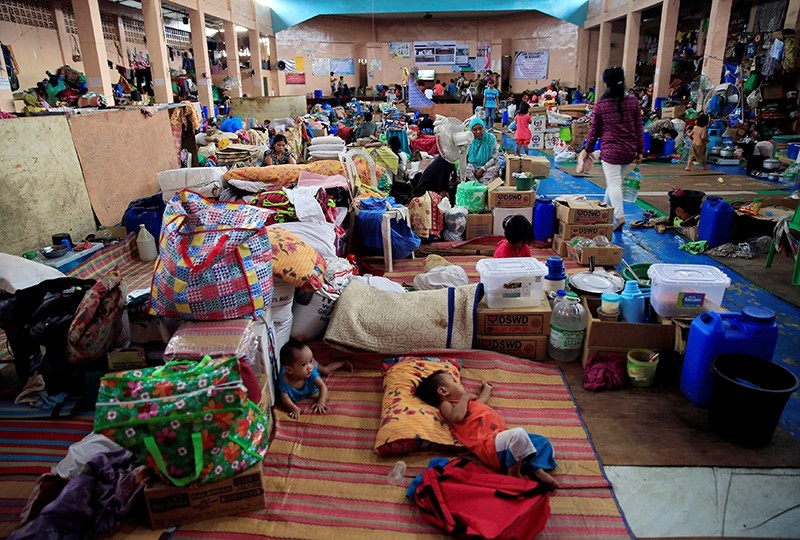 Evacuees stay inside an evacuation centre, as government troops continues their operations against pro-Daesh militants which seized Marawi city (Reuters Photo)
by Compiled from Wire Services Sep 08, 2017 12:00 am

The U.S. government on Tuesday committed $14.3 million (PHP730 million) in emergency relief and recovery assistance for communities affected by the ongoing conflict in Marawi City and its surrounding areas.

U.S. Ambassador to the Philippines Sung Kim announced the donation during a roundtable discussion with journalists at the U.S. Embassy in Manila.

"We all look forward to the end of the crisis, and the end of the fighting and suffering," he told a press briefing in Manila. "We have been and will continue to support the Philippine government's efforts to deal with the crisis."

Kim said about a quarter of the assistance would be earmarked for the delivery of such relief supplies as safe drinking water, hygiene kits, shelter materials for more than 600,000 people displaced by the conflict in Marawi City.

The rest of the aid would focus on restoring basic public services, such as health care, water and electricity, kick-starting livelihood projects, and promoting community programs to counter terrorism.

Troops are making a push to end the conflict that began on May 23 when hundreds of militants attacked Marawi City after government forces tried to arrest a local leader of the Daesh terrorist group.

The conflict has left more than 840 people dead, including 136 soldiers and 620 militants. The terrorists have also executed 45 civilians, while 40 people have died from illnesses in evacuation centers.

The fighting is now concentrated in the center of Marawi City, where buildings, houses and other infrastructure have been destroyed amid airstrikes, heavy artillery fire and bombings during the conflict.

The battle prompted President Rodrigo Duterte to place all of Mindanao under martial law on May 23, which is not set to lapse until the year's end.