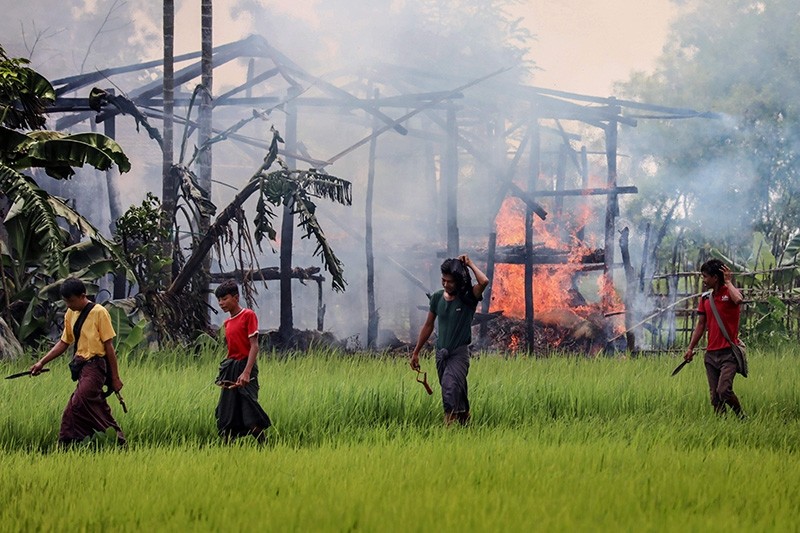 In this photograph taken on September 7, 2017, unidentified men carry knives and slingshots as they walk past a burning house in Gawdu Tharya village near Maungdaw in Rakhine state in Northern Myanmar (AFP Photo)
by Sep 09, 2017 12:00 am

Camps will be set up to provide aid for displaced Muslims inside Rakhine state, state-backed media said Saturday, the first time in a 16-day crisis Myanmar's government has offered any relief for Rohingya scattered by violence, many to Bangladesh.

Around 270,000 Rohingya have fled since Aug. 25 when militant attacks sent unrest churning through Rakhine, arriving in Bangladesh hungry and exhausted and squashing into already overcrowded refugee camps.

Tens of thousands more are believed to be on the move inside Rakhine, fleeing burning villages, the army and ethnic Rakhine mobs -- who Rohingya refugees accuse of attacking civilians -- only to become stranded in hills without food, water, shelter or medical care.

Bangladesh has urged Myanmar to stem the exodus by providing for the displaced inside the country and provide 'safe zones' for the Rohingya.

Around 27,000 Buddhists and Hindus have also been displaced following attacks by Rohingya militants and are receiving government help in monasteries and schools.

But the Rohingya, a stateless group refused citizenship by Myanmar, have been left to fend for themselves in what rights groups allege is a part of systematic campaign to force them out of the country.

Two weeks after violence scorched through the country, the government has said it will establish three camps in north, south and central Maungdaw -- the epicenter of the violence and a Rohingya majority area.

"Displaced people who are currently spread out will be able to receive humanitarian aid and medical care" distributed by local Red Cross workers, the Global New Light of Myanmar reported on Saturday.

The report did not refer directly to the Rohingya but mentioned village clusters where the minority lived until the unrest.

Branded 'Bengalis' -- shorthand for illegal immigrants from Bangladesh -- the Rohingya have long been subjected to discrimination in mostly Buddhist Myanmar.

Around 120,000 have languished in basic displaced camps following religious violence in 2012, while the rest are subject to suffocating restrictions on their movement and rights to work.

Yanghee Lee, the U.N. special rapporteur on human rights in Myanmar, on Friday said over a thousand people may have been killed in the subsequent army crackdown, the majority likely to be Rohingya.

In an interview with AFP she said Myanmar's star politician Aung San Suu Kyi, a fearless democracy campaigner under the former junta, had failed to use her moral authority to defend the Rohingya.

"I think we need to delete our memories of the imprisoned democratic icon," Lee said, explaining that Suu Kyi was now a politician not a rights defender.

The Nobel Peace Prize winner has been condemned for her refusal to bend to pressure and speak out for the Rohingya including by Suu fellow Nobel laureates Malala Yousafzai and Archbishop Desmond Tutu.