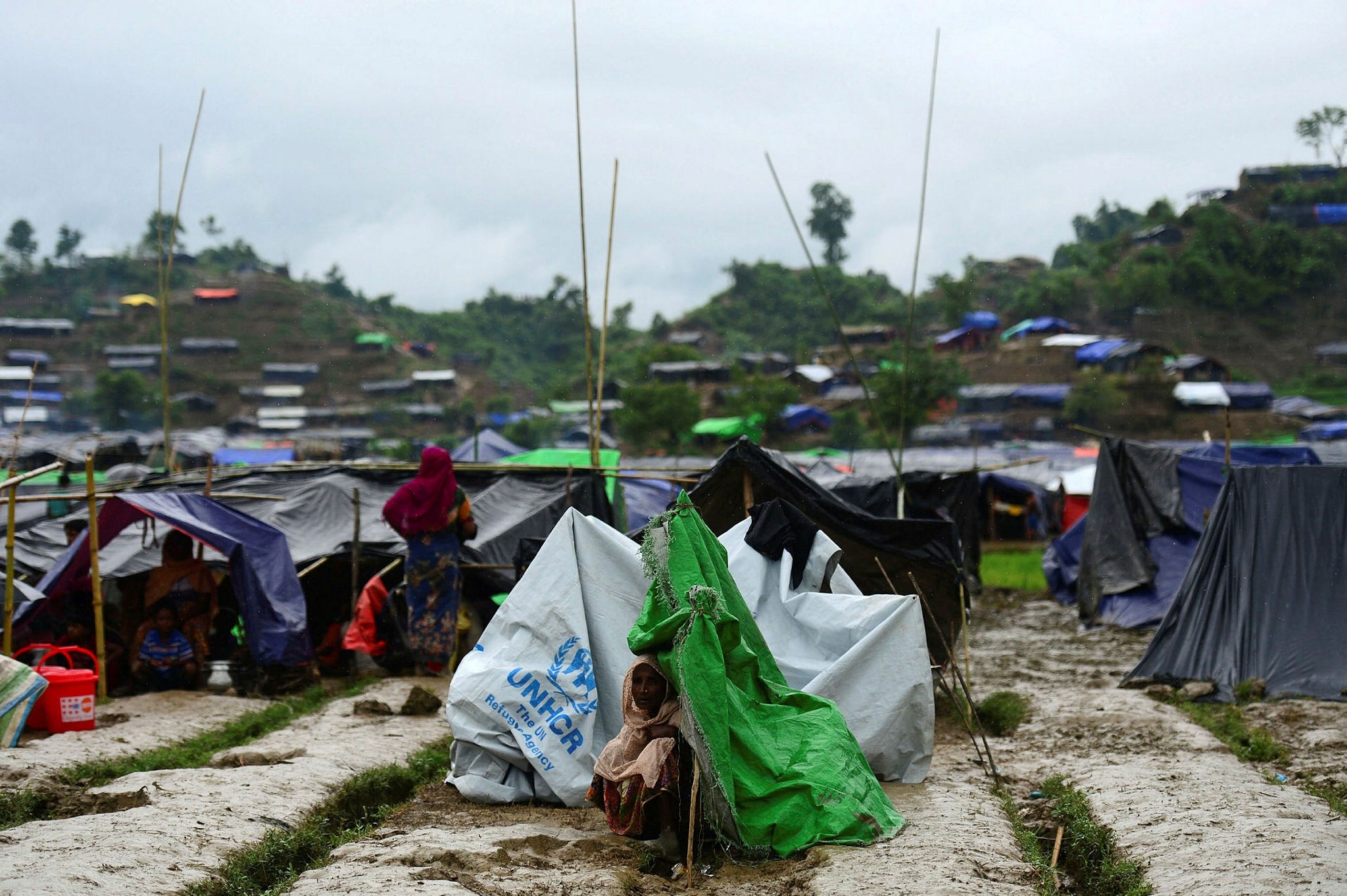 A Rohingya refugee woman sits next to a newly built makeshift shelter in a camp in Ukhia, Bangladesh on Sept.9.
by Yusuf Selman İnanç Sep 11, 2017 12:00 am

Recently a cease-fire was declared in Myanmar to facilitate the displacement of Rohingya Muslims. More than 270,000 people have already left their homes, but who are the Rohingyas?

The persecution of Rohingya Muslims in Myanmar is one of the worst tragedies on earth right now, but it is also the most overlooked. Rohingya Muslims, one of Myanmar's 135 ethnic groups, are denied the right to citizenship, which in turn deprives them of basic rights like access to healthcare, education and politics.

The decades-long oppression has forced the whole community to live in utter poverty while the Myanmar government has forced Rohingyas from their homes at every opportunity, creating an unprecedented humanitarian tragedy.

After a group of armed Rohingyas carried out a series of attacks on Myanmar security forces a few weeks ago, the government handed down a collective punishment on the already vulnerable community. Dozens of villages were set on fire, hundreds were raped, killed and thousands displaced.

The displaced population has nowhere to go, as Bangladesh, their only neighbor, claims it is unable to accept more Rohingya refugees. Fleeing to the forests and hill tracts near the Bangladesh border, Rohingyas are now faced with disease, arbitrary killings, and several other threats.

Turkey has recently launched a campaign to stop the displacement and help the Bangladesh government in welcoming more refugees. The first lady Emine Erdoğan and several Turkish officials paid a visit to Bangladesh last week to examine what Turkey could do on the ground.

With Ankara's experience in dealing with refugees from Syria, Iraq and other conflict zones, Turkey has been one of the few countries to have raised their concerns over the persecution of Rohingyas.

Thanks to international calls and growing pressure on the Myanmar government, a month-long ceasefire was declared over the weekend to allow humanitarian aid. Amid reports that the Myanmar army was forcing the Rohingya's to flee their homes and was laying land mines on its border with Bangladesh to prevent their return, the Arakan Rohingya Salvation Army (ARSA) said that immediate humanitarian aid was needed for more than 270,000 refugees who have no access to food and health facilities.

"ARSA strongly encourages all concerned humanitarian actors to resume their humanitarian assistance to all victims of the humanitarian crisis, irrespective of ethnic or religious background during the ceasefire period," the group said in a statement.

Even though the conflict and the subsequent sanitarian crisis have continued for years, there is little work that sheds light on the Rohingyas and their plight.

The word "Rohingya" means "from Arakan" and refers to the historical origin of the ethnic Rohingyas, who fled Arakan for Burma, modern-day Myanmar, when the British began colonizing Southeast Asia.

Following the collapse of the Arakan Kingdom, the ethnic group fled for other countries in the region to avoid enslavement at home and has faced persecution for centuries. The country of Burma renamed Myanmar in 1989, has refused citizenship to Rohingyas, issuing only temporary identity cards known as "white cards" to these internally displaced persons (IDPs).

Amid increasing pressure from local Buddhist extremists, the government canceled the Rohingyas' right to vote, previously granted before a constitutional referendum in 2015.

Furthermore, the government interferes in every aspect of their daily lives; barring everything from the establishment of businesses to obtaining work and even marriage. Ongoing violence and discriminatory state policies compel Rohingyas to flee.

Currently, 140,000 Rohingyas live in refugee camps in Myanmar, 130,000 in Malaysia and as many as 300,000 (prior to the recent displacement) in Bangladesh. The majority of them are unregistered immigrants who traveled on smuggler boats to escape persecution. The Rohingyas have also begun to take refuge in Indonesia and a few thousand have already settled in the country.

The Arakan Rohingya National Organization on its website said: "the Muslims or Rohingyas are told to discard Islamic names and adopt Burmese ones. Everywhere belonging to Muslims' or of Islamic tradition was razed to the ground. Hundreds of mosques have been demolished. Construction of new mosques or repairs to the old ones is prohibited. Pagodas, monasteries, and Buddhist temples have been erected in every nook and cranny of the Rohingya homeland."

"Confiscation of farm lands, uprooting of Muslim settlements, eviction of inmates, and the establishment of new Buddhist settlements on evacuated Muslim land as well as demolition of mosques, religious schools, and erection of pagodas, Buddhist temples with a view to changing the landscape of Arakan have continued unabated. Rape and dishonoring of women, forced marriage of Muslim women by Buddhists, banning hijab and forced use of contraceptives and imposition of restriction on the marriage of Rohingya couples have been rampant," the statement added.

On the exodus, the statement said, "About 1.5 million Rohingyas have so far been evicted from Arakan since the year of Burmese independence in 1948."