Number of Rohingya in Bangladesh jumps to 370,000, UNHCR says 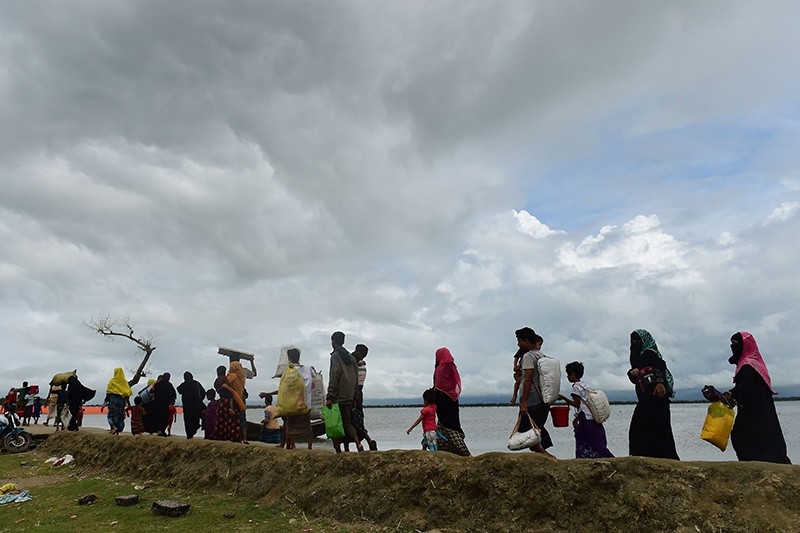 Rohingya Muslim refugees arrive from Myanmar after crossing the Naf river in the Bangladeshi town of Teknaf on September 12, 2017 (AFP Photo)
by Anadolu Agency Sep 12, 2017 12:00 am

The latest figure for refugees who have crossed from Myanmar's Rakhine state to Bangladesh is a 57,000 rise on the figure given by the U.N.'s refugee agency Monday.

The refugees are fleeing a fresh security operation in which they have said security forces and Buddhist mobs have killed men, women and children, looted homes and torched Rohingya villages.

According to Bangladesh, around 3,000 Rohingya have been killed in the crackdown.

Indonesia said Tuesday it will deliver aid including rice, blankets and clothes to Rohingya refugees in Bangladesh.

Indonesian Foreign Minister Retno Marsudi said assistance will be extended to refugees in Chittagong and Cox's Bazaar, as she spoke to journalists at the State Palace grounds in capital Jakarta.

Meanwhile, Pakistan, on behalf of the Organization of Islamic Cooperation (OIC), called on Myanmar government to cease atrocities against its Rohingya population.

"OIC calls upon Myanmar Government to immediately allow the United Nations Fact Finding Mission access to perform its duties as per its mandate," Faruk Amil, Pakistan's permanent representative to the U.N., said.

According to a statement issued by Pakistan's Foreign Office, Amil urged the international community to provide adequate humanitarian assistance to the Muslim civilians in the Rakhine State of Myanmar as well as to the refugees in Bangladesh.

Turkey has been at the fore in providing aid to Rohingya refugees and President Recep Tayyip Erdoğan has said he will raise the issue at the U.N.

Described by the U.N. as the world's most persecuted people, Rohingya have faced heightened fears of attack since dozens were killed in communal violence in 2012.

The U.N. documented mass gang rapes, killings -- including of infants and young children -- brutal beatings and disappearances committed by security personnel. In a report, U.N. investigators said the human rights violations may have constituted crimes against humanity.