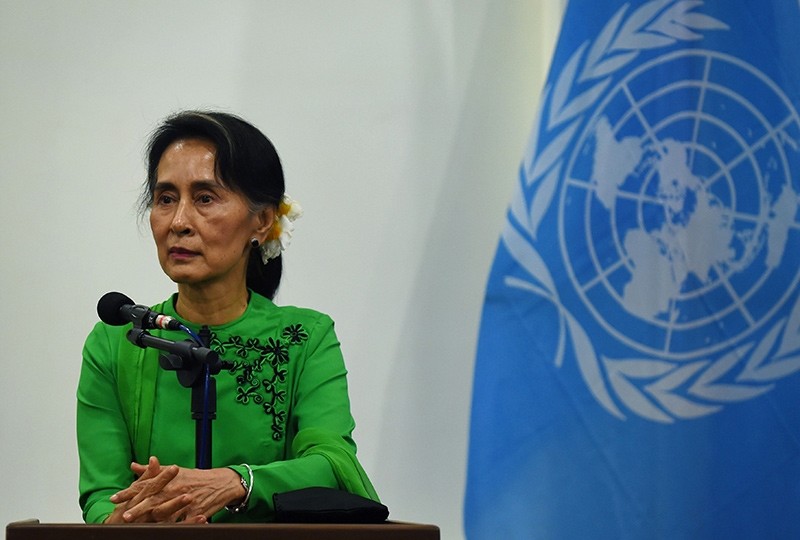 This file photo taken on August 30, 2016 shows Myanmar State Counsellor and Foreign Minister Aung San Suu Kyi listening to a journalist's question during a joint press conference with the UN secretary general in Naypyidaw (AFP Photo)
by Compiled from Wire Services Sep 13, 2017 12:00 am

The spokesman did not explain the decision but said the country's Vice President Henry Van Thio would attend the summit, which runs through next week.

The announcement comes after the U.N. human rights chief, Zeid Ra'ad Al Hussein, accused Myanmar of waging a "systematic attack" on Rohingya civilians and warned that "ethnic cleansing" seemed to be underway.

The U.N.'s National Security Council also plans to meet Wednesday to discuss the crisis, which continues to deepen as the number of Rohingya refugees making it to Bangladesh soars to 370,000.

International pressure has been growing on Buddhist-majority Myanmar to end the violence in the western state of Rakhine that began on Aug. 25 when Rohingya militants attacked about 30 police posts and an army camp.

Suu Kyi, a Nobel Peace Prize winner for her defiant democracy activism under Myanmar's former junta, was once the darling of the international community.

She made her debut before the U.N. assembly last September, after becoming former junta-run Myanmar's first civilian leader in decades, winning warm applause for her speech.

She vowed to find a solution to ethnic and religious hatreds in Rakhine "that will lead to peace, stability and development for all communities within the state."

In a sign of how far her star has fallen since, she has been pilloried by the same rights groups that campaigned for her release from house arrest for failing to speak up in defense of the Rohingya.

Denied citizenship by Myanmar, the stateless Rohingya are loathed in Buddhist-majority country.

Refugees streaming into Bangladesh have arrived with horrifying stories of indiscriminate killings and arson attacks at the hands of soldiers.

While the U.S. and other Western powers have rebuked the military campaign, Beijing offered words of support ahead of the U.N. Security Council meeting.