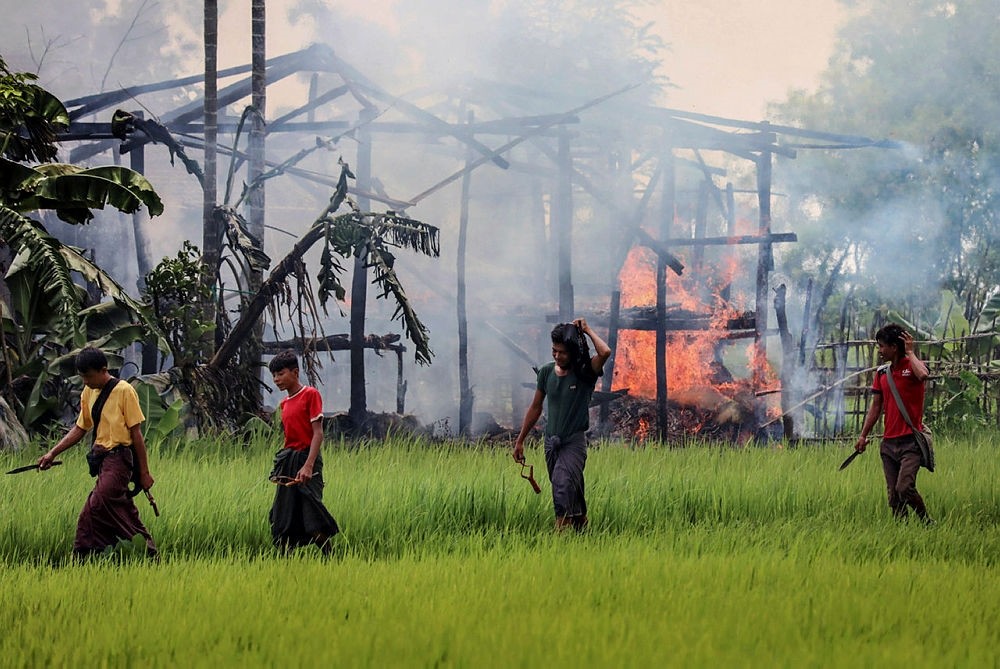 The Myanmar military offensive in the western state of Rakhine was triggered by a series of guerrilla attacks on Aug. 25 on security posts and an army camp in which about a dozen people were killed.

"The stance of China regarding the terrorist attacks in Rakhine is clear, it is just an internal affair," the state-run Global New Light of Myanmar newspaper on Thursday quoted China's ambassador, Hong Liang, as telling top government officials.

"The counter-attacks of Myanmar security forces against extremist terrorists and the government's undertakings to provide assistance to the people are strongly welcomed."

But at the United Nations in New York, China set a different tone, joining a U.N. Security Council expresion of concern about reports of excessive violence and calling for immediate steps to end it.

China competes with the United States for influence in Myanmar, which in 2011 began emerging from nearly 50 years of strict military rule and diplomatic and economic isolation.

Earlier this week, the Trump administration called for protection of civilians.

The violence in Rakhine and the exodus of refugees is the most pressing problem Nobel Peace laureate Aung San Suu Kyi has faced since becoming national leader last year.

Suu Kyi is due to address the nation on Tuesday.

Critics have called for her to be stripped of her Nobel prize for failing to do more to halt the strife, though national security policy is in the hands of the generals whose junta previously ran the country.

U.N. Secretary-General Antonio Guterres and the U.N. Security Council on Wednesday urged Myanmar to end the violence, which he said was best described as ethnic cleansing.

"When one third of the Rohingya population had to flee the country, could you find a better word to describe it?" he told a news conference in New York.

The government says it is targeting "terrorists", while refugees say the offensive aims to push Rohingya out of Buddhist-majority Myanmar.

Numerous Rohingya villages in the north of Rakhine have been torched but authorities have denied that security forces or Buddhist civilians have been setting the fires. They blame the insurgents.

The government said on Wednesday 45 places had been burned. It did not provide details but a spokesman said out of 471 villages in the north of Rakhine, 176 had been deserted and at least some people had left 34 others.

The spokesman, Zaw Htay, said the people going to Bangladesh were either linked to the insurgents, or women and children fleeing conflict.

According to government figures, 432 people have been killed, most of them insurgents, since Aug. 25. Bangladesh authorities say at least 100 bodies have been found in a border river and on nearby beaches, some with wounds.

Several refugee boats have capsized, one on Thursday when a child drowned, a Reuters witness in Bangladesh said.

Smoke was rising from at least two places on the Myanmar side on Thursday. It was not clear what was burning.

"Ethnic cleansing" is not recognised as an independent crime under international law, the U.N. Office on Genocide Prevention says, but it has been used in U.N. resolutions and acknowledged in judgements and indictments of the International Criminal Tribunal for the former Yugoslavia.

A U.N. commission of experts defined it as "rendering an area ethnically homogeneous by using force or intimidation to remove persons of given groups".

The 15-member Security Council met behind closed doors on Wednesday to discuss the crisis for the second time since it began and agreed to publicly condemn the situation.

The council "expressed concern about reports of excessive violence during the security operations and called for immediate steps to end the violence in Rakhine, de-escalate the situation, re-establish law and order, ensure the protection of civilians ... and resolve the refugee problem".

British U.N. Ambassador Matthew Rycroft said it was the first statement from the Security Council on Myanmar in nine years. Such statements have to be agreed by consensus and Russia and China have traditionally protected Myanmar from any action.

Bangladesh says all the refugees will have to go home and has called for safe zones in Myanmar. Myanmar says safe zones are unacceptable.

Aid agencies are struggling to ramp up operations in Bangladesh and a U.N. top official said on Wednesday an earlier U.N. target of $77 million would be inadequate to deal with the crisis. "There are acute shortages of everything," the U.N. children's agency said.

There are also fears of a humanitarian crisis on the Myanmar side of the border. The government has accused some aid groups of helping the insurgents and has restricted access.

The aid group Médecins Sans Frontières said it had reports that its clinics there had been torched and it called for "unfettered access to people in desperate need".