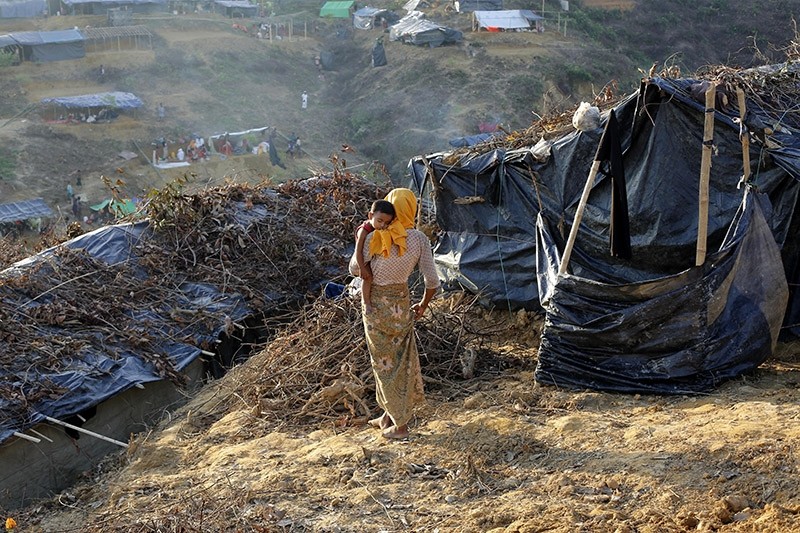 A Rohingya woman stands close to her makeshift tent at the Balukhali camp in Ukhiya, Bangladesh, 15 September 2017. (EPA Photo)
by Compiled from Wire Services Sep 15, 2017 12:00 am

Aid organizations are still not able to access all of Myanmar's restive Rakhine state, where deadly violence has displaced hundreds of thousands of minority Muslims, the U.N. food agency and the Red Cross said Friday in Geneva.

"We can't go to the northern part because military operations are ongoing," said Bettina Luescher, spokeswoman of the World Food Programme.

However, the UN food agency has resumed deliveries in the central part of Rakhine this week for 50,000 displaced people.

While the Red Cross has been able to help 10,000 people in Myanmar, its aid has mostly reached cities.

The organization does not have access to villages, according to Sanela Bajrambasic, spokeswoman of the International Committee of the Red Cross.

The Red Cross therefore does not know how many villages have been destroyed since the violence broke out late last month, she said.

"Our field research backs what the satellite imagery has indicated - that the Burmese (Myanmar) military is directly responsible for the mass burning of Rohingya villages in northern Rakhine State," said Phil Robertson, deputy Asia director at Human Rights Watch.

"The United Nations and member countries should urgently impose measures on the Burmese government to stop these atrocities and end the forced flight of Rohingya from Burma."

Thousands of Rohingya are continuing to stream across the border, with U.N. officials and others demanding that Myanmar halt what they describe as a campaign of ethnic cleansing that has driven nearly 400,000 Rohingya to flee in the past three weeks.

That number includes an estimated 240,000 children, UNICEF said in Geneva on Friday.

Ethnic Rohingya have long faced discrimination in Myanmar and are denied citizenship, even though many families have lived there for generations.

U.N. agencies fear continued violence in Myanmar may eventually drive up to 1 million Rohingya into Bangladesh.

Ties between the two neighbors have been strained by the conflict.

On Friday, Bangladesh issued a fresh warning to Myanmar about the consequences of violating its airspace, calling the incidents "provocative acts."

The Foreign Ministry said in a statement that Bangladesh recorded violations by military drones and helicopters on September 10, 12 and 14, as well as August 25, when the ethnic violence erupted in Rakhine.