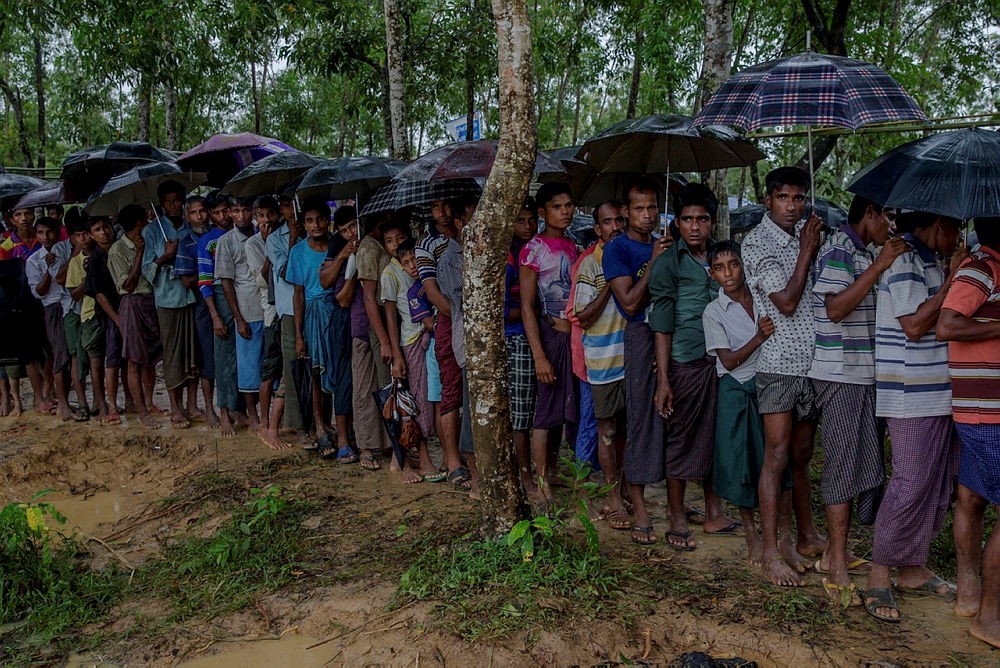 Thousands of Rohingya Muslims in violence-racked northwest Myanmar are pleading with the authorities for safe passage from two remote villages that are cut off by hostile Buddhists and running short of food.

Another Rohingya contacted by Reuters, who asked not to be named, said ethnic Rakhine Buddhists came to the same village and shouted, "Leave, or we will kill you all."

Fragile relations between Ah Nauk Pyin and its Rakhine neighbours were shattered on Aug. 25, when deadly attacks by Rohingya militants in Rakhine State prompted a ferocious response from Myanmar's security forces.

At least 430,000 Rohingya have since fled into neighbouring Bangladesh to evade what the United Nations has called a "textbook example of ethnic cleansing".

About a million Rohingya lived in Rakhine State until the recent violence. Most face draconian travel restrictions and are denied citizenship in a country where many Buddhists regard them as illegal immigrants from Bangladesh.

Tin Maung Swe, secretary of the Rakhine State government, told Reuters he was working closely with the Rathedaung authorities, and had received no information about the Rohingya villagers' plea for safe passage.

"There is nothing to be concerned about," he said when asked about local tensions. "Southern Rathedaung is completely safe."

National police spokesman Myo Thu Soe said he also had no information about the Rohingya villages, but said he would look into the matter.

Ah Nauk Pyin sits on a mangrove-fringed peninsula in Rathedaung, one of three townships in northern Rakhine State. The villagers say they have no boats.

Until three weeks ago, there were 21 Muslim villages in Rathedaung, along with three camps for Muslims displaced by previous bouts of religious violence. Sixteen of those villages and all three camps have since been emptied and in many cases burnt, forcing an estimated 28,000 Rohingya to flee.

Rathedaung's five surviving Rohingya villages and their 8,000 or so inhabitants are encircled by Rakhine Buddhists and acutely vulnerable, say human rights monitors.

The situation is particularly dire in Ah Nauk Pyin and nearby Naung Pin Gyi, where any escape route to Bangladesh is long, arduous, and sometimes blocked by hostile Rakhine neighbours.

Maung Maung, the Rohingya official, said the villagers are resigned to leaving, but the authorities have not responded to their requests for security. At night, he said, villagers had heard distant gunfire.

"It's better they go somewhere else," said Thein Aung, a Rathedaung official, who dismissed Rohingya claims that Rakhines were threatening them.

Only two of the Aug. 25 attacks by the Arakan Rohingya Salvation Army (ARSA) took place in Rathedaung. But the township was already a tinderbox of religious tension, with ARSA citing the mistreatment of Rohingya there as one justification for its offensive.

In late July, Rakhine residents of a large, mixed village in northern Rathedaung corraled hundreds of Rohingya inside their neighbourhood, blocking access to food and water.

A similar pattern is repeating itself in southern Rathedaung, with local Rakhine citing possible ARSA infiltration as a reason for ejecting the last remaining Rohingya.

Maung Maung said he had called the police at least 30 times to report threats against his village.

On Sept. 13, he said, he got a call from a Rakhine villager he knew. "Leave tomorrow or we'll come and burn down all your houses," said the man, according to a recording Maung Maung gave to Reuters.

When Maung Maung protested that they had no means to escape, the man replied: "That's not our problem."

On Aug. 31, the police convened a roadside meeting between two villages, attended by seven Rohingya from Ah Nauk Pyin and 14 Rakhine officials from the surrounding villages.

Instead of addressing the Rohingya complaints, said Maung Maung and two other Rohingya who attended the meeting, the Rakhine officials delivered an ultimatum.

"They said they didn't want any Muslims in the region and we should leave immediately," said the Rohingya resident of Ah Nauk Pyin who requested anonymity.

The Rohingya agreed, said Maung Maung, but only if the authorities provided security.

He showed Reuters a letter that the village elders had sent to the Rathedaung authorities on Sept. 7, asking to be moved to "another place". They had yet to receive a response, he said.

Relations between the two communities deteriorated in 2012, when religious unrest in Rakhine State killed nearly 200 people and made 140,000 homeless, most of them Rohingya. Scores of houses in Ah Nauk Pyin were torched.

Since then, said villagers, Rohingya have been too scared to leave the village or till their land, surviving mainly on monthly deliveries from the World Food Programme (WFP). The recent violence halted those deliveries.

The WFP pulled out most staff and suspended operations in the region after Aug. 25.

Residents in the area's two Rohingya villages said they could no longer venture out to fish or buy food from Rakhine traders, and were running low on food and medicines.

Maung Maung said the local police told the Rohingya to stay in their villages and not to worry because "nothing would happen," he said.

But the nearest police station had only half a dozen or so officers, he said, and couldn't do much if Ah Nauk Pyin was attacked.

A few minutes' walk away, at the Rakhine village of Shwe Long Tin, residents were also on edge, said its leader, Khin Tun Aye.

They had also heard gunfire at night, he said, and were guarding the village around the clock with machetes and slingshots in case the Rohingya attacked with ARSA's help.

He said he told his fellow Rakhine to stay calm, but the situation remained so tense that he feared for the safety of his Rohingya neighbours.

"If there is violence, all of them will be killed," he said