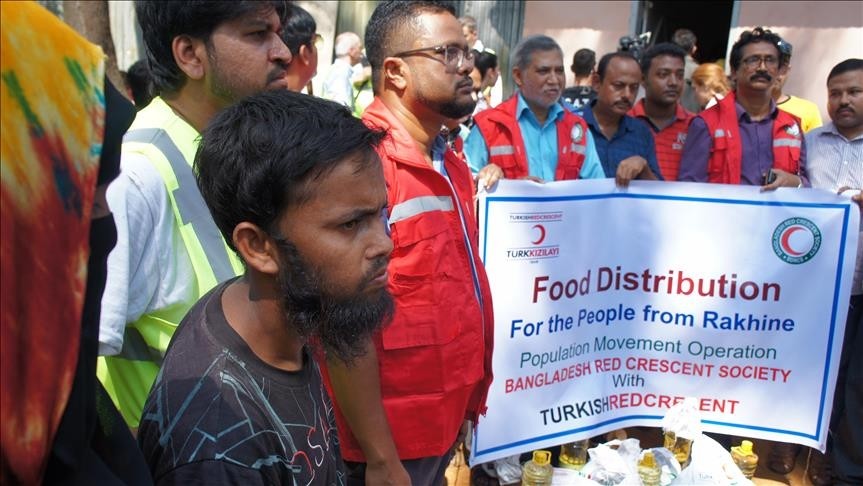 Turkey is continuing aid campaigns for Rohingya Muslims, who have sought refuge in neighboring Bangladesh amid waves of violence in Myanmar.

One of the most prominent Turkish institutions sending aid to the area is Turkish Red Crescent.

The deputy president of the aid organization, Naci Yorulmaz, shared a video on Saturday, showing a baby from the oppressed community enjoying fresh sorbet.

Yusuf of the oppressed Rohingya Muslim minority quenches his thirst as Turkish Red Crescent ups aid to the communityhttps://t.co/otqngEuO0Y pic.twitter.com/GHMGNTQhxM

"Yusuf from the Arakan community seems to be so thirsty. Wish that sorbet did not finish that quick," he said in a tweet. "We have been alongside Yusuf today."

The organization has also launched a campaign titled "Be a life for Rakhine State" aims to reach hundreds of thousands of Rohingya Muslims.

"Those who stay in Rakhine state and those who fled to Bangladesh urgently need clean drinking water, medicine, food and tents," Kerem Kınık, president of the agency said.

People can donate by sending a text message to 2868, dialing call center at 168 or through cash in all branches of the Turkish Red Crescent across the country.

Those who want to support the campaign from abroad can make donations to the following account number of Ziraat Bank in Germany.

Turkey launched a new aid campaign on Monday for Rohingya Muslims in an effort to move beyond condemnation messages and to take concrete humanitarian steps in the ongoing tragedy. The aid initiative will build temporary tent camps and offer psychosocial support to families.

A large number of NGOs and other organizations are involved in the initiative, including the Turkish Red Crescent, the Presidency of Religious Affairs (Diyanet) and the Health Ministry, all of which would accept donations as part of the campaign.

Myanmar security forces launched a fresh crackdown in Rakhine on August 25 in response to renewed attacks by Rohingya militants, creating a new wave of refugees heading toward Bangladesh.

Bangladesh has agreed to free land for a new camp to shelter some of the hundreds of thousands of Rohingya Muslims who have fled recent violence in Myanmar, an official said.