Number of Rohingya Muslims in Bangladesh reaches 421,000 since Aug. 25 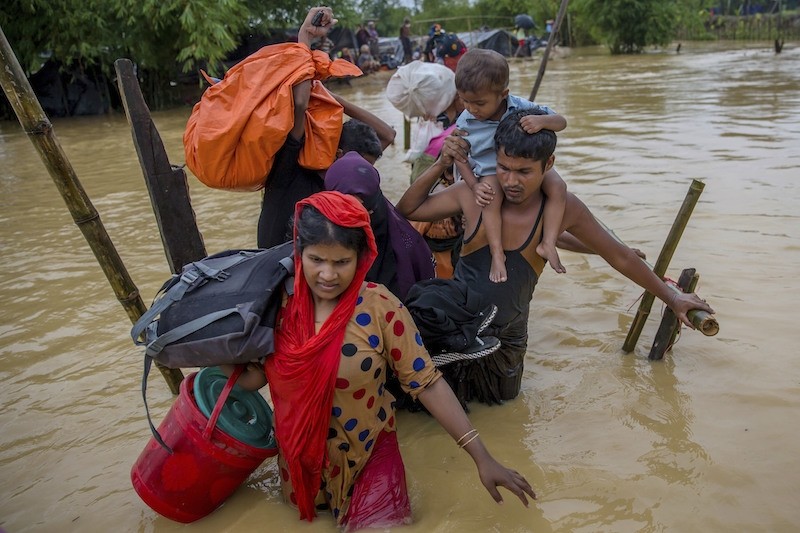 More than 421,000 Rohingya Muslims have been forced to flee their homes in Myanmar and cross the border into Bangladesh to escape violence and persecution since Aug. 25, the U.N. said Tuesday.

"Many of the new arrivals, who walked for days through jungle in intense heat and monsoon rains, are already sick and malnourished by the time they reach the teeming settlements of Cox's Bazar, Bangladesh," Joel Millman, spokesman for the U.N.'s International Agency for Migration (IOM) told a news conference at the U.N. in Geneva Tuesday.

Duniya Aslam Khan, spokesman for the U.N. refugee agency UNHCR, also said: "The Bangladesh authorities have already begun biometric registration of new arrivals, registering some 1,000 people a day just in Kutupalong," in Ukhia, in the southeast.

The refugees are fleeing a fresh security operation in which security forces and Buddhist mobs have killed men, women and children, looted homes and torched Rohingya villages. According to Bangladesh, around 3,000 Rohingya have been killed in the crackdown.

UNHCR spokeswoman Marixie Mercado told a news conference in Geneva on Tuesday that 250,000 children had fled Myanmar for Bangladesh.

"We are learning more about the real risks children face," she added. "In recent days, over 23,000 children below 5 years old were screened for malnutrition in a number of different sites.

"About 13 percent were reported to be acutely malnourished. These are very preliminary estimates, as the numbers reached are small, and will change as we reach more children."

Turkey has been at the forefront of providing aid to Rohingya refugees, and President Recep Tayyip Erdoğan has said he will raise the issue at the current U.N. General Assembly.

The U.N. documented mass gang rapes, killings -- including of infants and young children -- brutal beatings, and disappearances committed by security personnel. In a report, U.N. investigators said such violations may have constituted crimes against humanity.