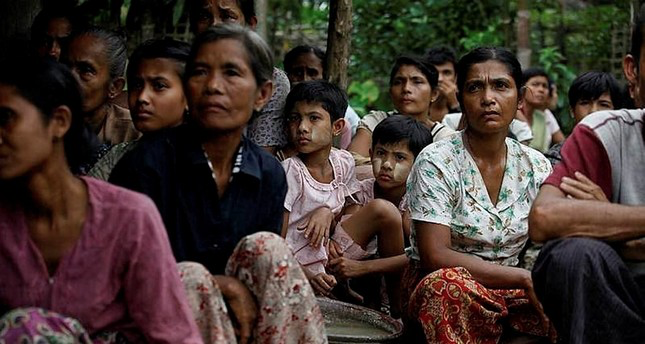 Rohingya Muslums sit in a temporary refugee camp after losing their homes during the violence in the Rakhine state.
by Daily Sabah with Wires Sep 19, 2017 12:00 am

Regarding the violence and oppression against Myanmar's Rohingya Muslim minority, President Recep Tayyip Erdoğan said "the international community has failed in the Rohingya crisis, just like it did in Syria."

He said the violence and crimes committed against the Rohingya will go down as a 'dark stain' in human history.

"These developments have proven right our call to restructure the United Nations Security Council, which we summarized as the 'World is bigger than 5,'" he added, mentioning his criticism about the structure of the UNSC, which only has five permanent members who basically decide the top governing body's policies.

French President Emmanuel Macron also called for an end to Myanmar's military campaign that has driven some 400,000 Rohingya Muslims from the country, describing their plight as ethnic cleansing, in his first address to the United Nations.

"The military operation must stop, humanitarian access must be guaranteed and the rule of law restored in the face of what we know is ethnic cleansing" in Rakhine state, Macron said.

France plans an initiative in the U.N. Security Council in relation to the crackdown on Myanmar's Rohingya Muslim population, he added.

Comparing the situation in Myanmar's Rakhine province to the massacres in Bosnia in 1995 and Rwanda in 1994, the leader of Africa's most populous nation declared: "The international community cannot remain silent."

More than 420,000 people have fled violence in Rakhine, which Buhari said bears the hallmarks of a "state-backed program of brutal depopulation" targeting Rohingya on the basis of their ethnicity and Muslim religion.

"We fully endorse the call by the secretary-general on the government of Myanmar to order a halt to the ongoing ethnic cleansing and ensure the safe return of the displaced Rohingya to their homes in safety and dignity," he said.

Meanwhile, the U.K. announced that it suspended military training to the Myanmarese army.

Britain said that it had suspended its educational training courses for the Myanmar military due to the ethnic violence in Rakhine state.

London said it had "deep concern" about human rights abuses and would not be resuming the military courses unless there was an "acceptable resolution" to the ongoing Rohingya crisis.