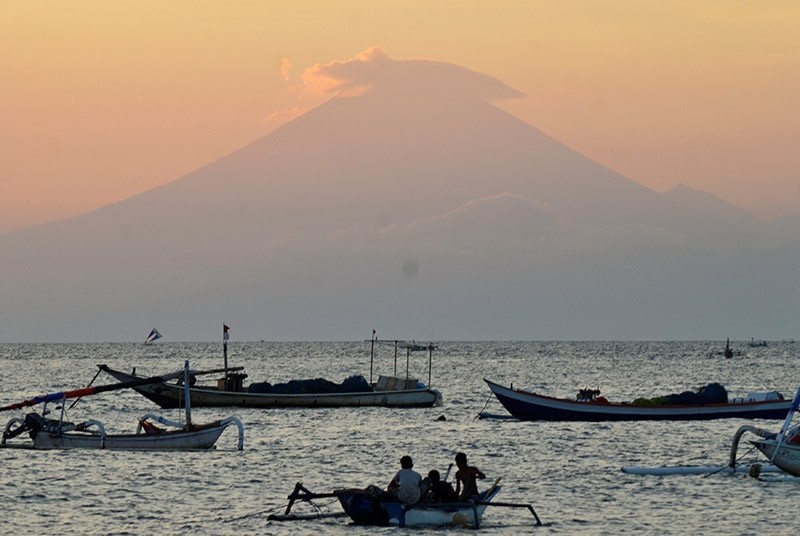 Mount Agung, an active volcano located on the resort island of Bali that has been placed on alert level 3 following recent seismic activity, is seen from Mataram on nearby Lombok island, Indonesia September 21, 2017. (Reuters Photo)
by Compiled from Wire Services Sep 22, 2017 12:00 am

Indonesian authorities have raised the alert level for the Mount Agung volcano on the tourist island of Bali to the highest level, and some 10,000 villagers have left their homes around the mountain, officials said Friday.

It was the third time in little more than a week that the alert level has been raised. The Department of Meteorology, Climate and Geophysics said there has been a "tremendous increase" in seismic activity at the mountain, indicating a greater probability of an eruption, though it couldn't give a timeframe.

The National Disaster Mitigation Agency said no residents or tourists should be within 9 kilometers (6 miles) of the crater and within 12 kilometers (7.5 miles) to the north, northeast, southeast and south-southwest.

"Volcanic activity remains high and there are indications of magma rising to the surface and causing tremors," said Sutopo Purwo Nugroho of the National Disaster Mitigation Agency.

"There should be zero public activity within the specified radius in case there is an eruption," Nugroho said.

The agency earlier said about 9,400 villagers have evacuated from their houses and are scattered across the districts of Karangasem, Klungkung and Buleleng.

However, flights at Bali's international airport were operating as normal and there was little disruption to tourism operators across the rest of the island, authorities said.

Some residents in villages at the foot of Mount Agung said they were reluctant to leave immediately. Others gathered to watch the volcano.

Others packed their belongings into trucks for evacuation, while more stopped to watch as clouds of white smoke rose from the crater, which is around 3,000 meters (9,840 feet) above sea level.

The mountain, 72 kilometers (45 miles) to the northeast of the tourist hotspot of Kuta, is among more than 120 active volcanoes in Indonesia.

The country of thousands of islands is prone to seismic upheaval due to its location on the Pacific "Ring of Fire," an arc of volcanoes and fault lines encircling the Pacific Basin.

More than 7,000 of the evacuees were in the 840 square kilometer (325 square mile) district surrounding the volcano, Karangasem, which is home to about 408,000 people.