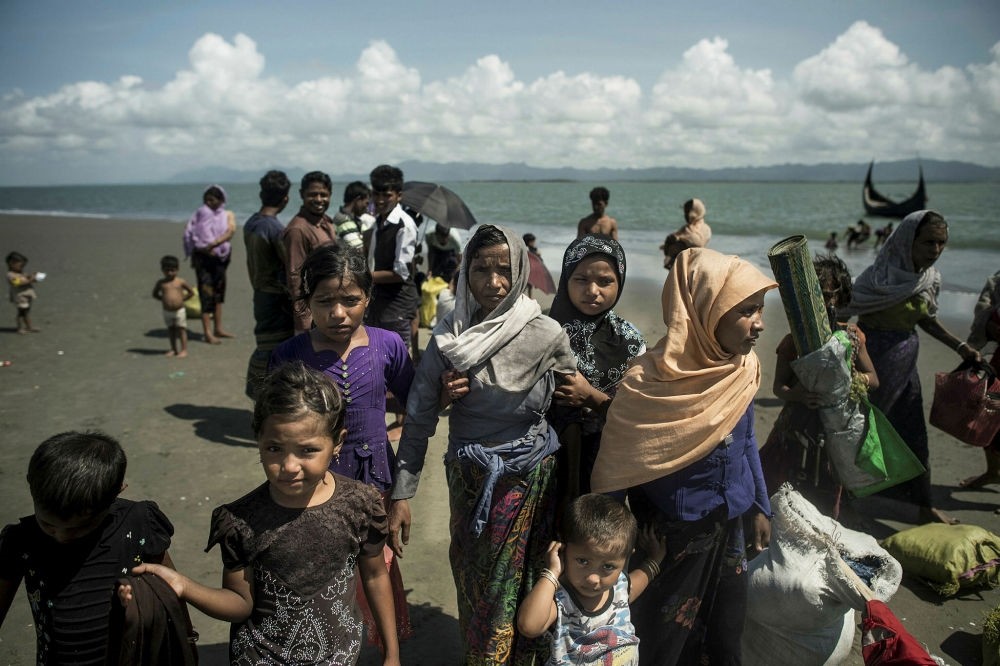 Rohingya Muslim refugees walk on the Bangladeshi shoreline of the Naf River after crossing the border from Myanmar in Teknaf on Sept. 30.
by Compiled from Wire Services Oct 02, 2017 12:00 am

Thousands of Rohingya Muslims continue to flee Rakhine state to join the refugee exodus to Bangladesh as the U.N. calls on the international community to step up aid

The head of the United Nations' food-assistance agency urged the international community to step up its support for the relief operation for Rohingya refugees in Bangladesh or risk "a massive catastrophic disaster."

David Beasley, head of the U.N.'s World Food Program, said yesterday that the WFP needs $75 million in the next five to six months to meet current and anticipated food needs.

"We need support from around the world because you're talking about a literal humanitarian disaster," Beasley said. "If we don't get the support we need, from health care to proper nutrition and safe water and sanitation and sheltering, this could explode into a catastrophic humanitarian disaster."

The WFP says it has already enrolled around 460,000 people in the camps in a program that gives them 25 kilograms (55 pounds) of rice every two weeks for the next six months.

Thousands of Rohingya Muslims remain on the move from townships hit hard by recent communal violence. Half of Rakhine's roughly 1 million Rohinyga Muslim population has fled to Bangladesh since then, creating the world's largest refugee crisis, alleging their villages were incinerated by the army and Rakhine mobs.

More than 2,000 Rohingya have massed along Myanmar's coast this week after trekking from inland villages in Rakhine state to join the refugee exodus to Bangladesh, state media reported last Saturday.

They follow more than half a million fellow Rohingya who have emptied out of northern Rakhine in a single month, fleeing an army crackdown and communal violence the U.N. says amounts to "ethnic cleansing."

The journey to Bangladesh is fraught with danger for the stateless Muslim minority, who have faced decades of systematic oppression in mainly Buddhist Myanmar.

After fleeing burning villages they say were set alight by soldiers and Buddhist mobs, more than 100 Rohingya have drowned in the scramble to cross the Naf River that divides the two countries.

The latest boat capsize on Thursday has left some 60 feared dead, with 23 bodies - mainly of children - brought to shore as dozens more remain missing.

The crowds building up along Rakhine's coast hail from the same inland area, Buthidaung township, as many of those who perished in the boat tragedy.

"Starting on Tuesday, they left their region, claiming that they felt insecure to remain because they were now living in a sparsely populated area, as most of their relatives had left for Bangladesh," the state-run Global New Light of Myanmar reported.

More than half had gathered on a beach near Lay Yin Kwin village, the report said, with photos of women and children clustered together on the sand as security officers looked on.

The U.N. has previously reported that increasingly isolated Muslim communities in Rakhine are receiving regular threats from ethnic Rakhine Buddhists to leave the area. The crisis has inflamed already blistering religious tensions and fueled a dizzying array of claims and counterclaims from different ethnic groups.

The Muslim Rohingya have been the target of especially acute hatred in Myanmar, where they are denied citizenship and are instead branded "Bengalis" or illegal migrants who do not belong in the Buddhist-majority country.