Over 14,000 Rohingya children on brink of malnutrition 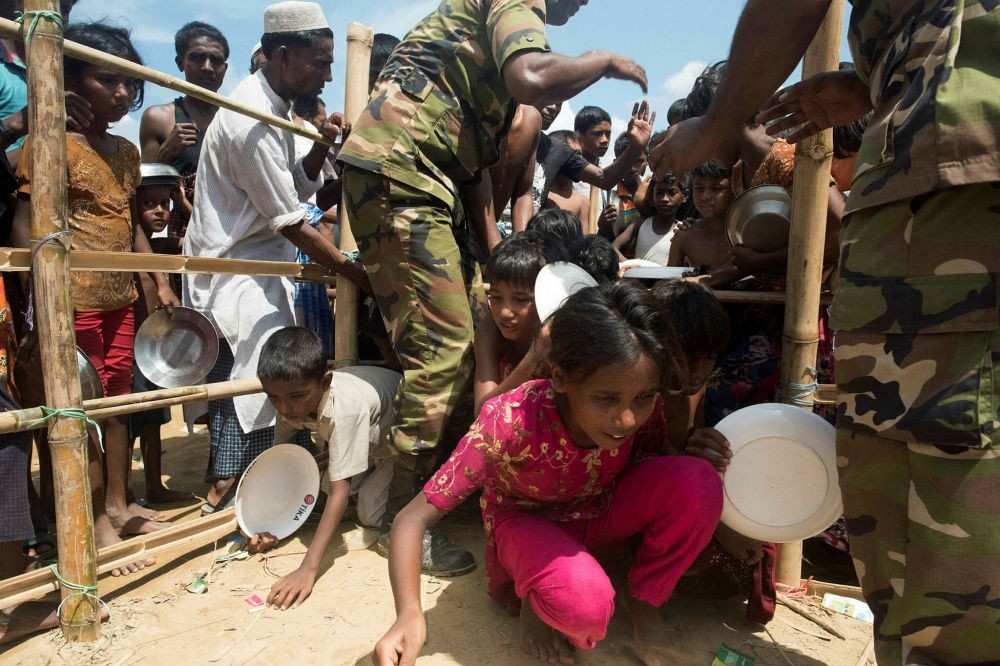 Rohingya Muslim refugee children rush to line up at a food distribution in the Balukhali refugee camp near Gumdhum, Oct. 1. (AFP Photo)
by Oct 03, 2017 12:00 am

The 5-year-old Rohingya boy was so emaciated that doctors could not insert a drip into his tiny arm, one of thousands of children facing life-threatening malnutrition in overstretched Bangladeshi refugee camps.

"He said he hadn't eaten anything in eight days. Nothing," said doctor SK Jahidur Rahman at a clinic run by Bangladeshi medical charity Gonoshasthaya Kendra.

The lucky ones make it to the overwhelmed clinics just in time. But some are not so fortunate, dying before help can reach them or forced to beg by the roadside.

The U.N. says more than 14,100 children are at risk of dying from malnutrition in wretched camps where half a million mainly Rohingya refugees depend entirely on charities for survival.

Food distribution in the vastly overcrowded settlements is still ad hoc and uncoordinated, the U.N. says, more than a month after refugees began pouring into southern Bangladesh to escape ethnic bloodshed in Myanmar.

Huge crowds descend on aid deliveries and soldiers need to herd starving people into bamboo pens where they squat cheek by jowl under the scorching sun for a meal. Many go hungry as charities scramble to feed 500,000 mouths every day.

Children make up the bulk of new arrivals and are most vulnerable to the paucity of food, with 145,500 infants under five needing urgent intervention to stave off malnutrition, aid agencies say.

"Lots of children are showing all the signs of hunger and malnutrition, which is an alarming prospect when they've just fled so much horror," said Save the Children's emergency health unit director Dr Unni Krishnan.

In a field clinic for infants suffering the severest malnutrition, Monura tried to soothe her gaunt 13-month-old daughter Rian Bebe, whose cheekbones jutted out below sunken eyes.A nurse wrapped a measuring tape around her pencil-thin arm and placed her tiny frame on the scales -- 5.5 kilograms, less than the weight of a healthy child half her age.Monura, who like many Rohingya uses one name, said she had little to feed her desperately hungry child on the five-day trek from Myanmar.

"Most sip a little water and walk five days," said Dr Rahman. "They hide in the jungle, chewing wood, anything, to beat hunger."

Many Rohingya children were already malnourished before making the perilous journey to Bangladesh, doctors say. Their health has since deteriorated further.

The Rohingya come from impoverished Rakhine, where state-imposed restrictions have ensured abysmal living standards for the persecuted Muslim community.

Their children's immune systems are already weakened, leaving them defenseless should a disease outbreak sweep through the camps as charities fear.

Monura's little girl, chewing on a high-calorie paste, has been rescued just in time and should make a slow recovery. But for others it is a different story.

In the largest district hospital in Cox's Bazar, a skeletal eight-month-old girl died after being admitted with severe malnutrition and pneumonia contracted in her enfeebled state.

"Skin and bones," lamented Shaheen Abdur Rahman, the hospital's resident medical officer, of the dying girl brought to his ward. "It was a very grave condition."

Others drift through the camps desperately seeking food among the chaotic throngs and begging people in passing cars for morsels.

"He can't get enough milk. I can't manage to get any food for myself either. I fed him a little banana someone gave me, but that made him sicker," she told Agence France-Presse (AFP).

In a nearby canteen, men in singlets sweated over huge cauldrons, toiling throughout the night to make rice, meat and lentils.

"They will be working for months like this. It is very hard work to cook for 10,000 people," said Abdul Mukit, a volunteer overseeing the kitchen run by Turkish government aid body TIKA.

For thousands of children, most of whom survive on boiled rice and high-energy biscuits when they can get them, this could be their only proper meal of the day.

As a truck carrying the 40 kilogram pots approached a relief distribution area, children swarmed the sunbaked clearing from all directions, naked toddlers struggling to keep up with the surge.

Corralled into queues by the military, they sprinted to the volunteers clutching outstretched plates, buckets and plastic bags -- whatever they had to hand.

"It makes me feel good," said head chef Manzar Alam of his part in feeding the youngsters, who carefully take their curry and rice back to their shanties.

Tens of thousands of Rohingyas have sheltered in refugee camps in Rakhine since communal violence flared in mid-2012. The state is home to around 1.2 million Rohingyas, who have long been officially labelled Bengali, suggesting they are illegal immigrants from Bangladesh. Despite having lived in the area for generations, Rohingyas were effectively denied citizenship with a 1982 nationality law and have restricted basic rights such as freedom of movement. According to the law, foreigners cannot become naturalized citizens of Myanmar unless they can prove a close familial connection to the country.