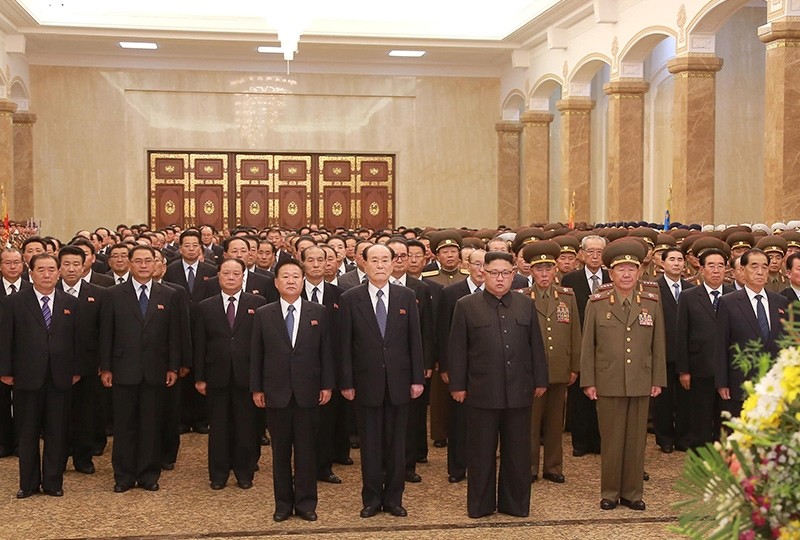 North Korean leader Kim Jong Un visits the Kumsusan Palace of the Sun during the Second Plenum of the 7th Central Committee of the Workers' Party of Korea (WPK) (Reuters Photo)
by Associated Press
Oct 09, 2017 12:00 am

The promotion of Kim Yo Jong came at a meeting of senior party members as North Korea marked the 20th anniversary of Kim Jong Il's acceptance of the title of general secretary of the ruling Worker's Party of Korea.

Kim Yo Jong was made an alternate member of the decision-making political bureau of the party's central committee. The late Kim Jong Il, North Korea's "eternal general secretary," is the father of Kim Jong Un and Kim Yo Jong.

Thousands of people, mostly students, packed Kim Il Sung Square in Pyongyang to dance and watch fireworks to mark the anniversary on Sunday night. Earlier in the day, North Korean state media announced that the country's top leadership had gathered the day before, headed by current leader Kim Jong Un.

Kim repeated Pyongyang's defiance of the U.S. and its determination to push forward its nuclear program, while bringing a "fresh upswing" in the country's economy to show its strength despite the international trade sanctions and isolation the nuclear program has generated.

Kim's younger sister, believed to be either 28 or 30, was elected as an alternate member of the political bureau of the party's central committee, according to a report Sunday by the Korean Central News Agency. She is believed to be one of Kim Jong Un's closest confidants. They were born to the same mother, Ko Yong Hui.

Michael Madden, founder of the influential NK Leadership Watch website, said the appointment shows the sister's daily activities are more substantive and more important than some analysts had contended. He said it also indicates that the Ko Yong Hui line, when taken with the killing of Kim's half brother, Kim Jong Nam, has been "conclusively established as the sole succeeding branch of the Kim family."

Two women — one Indonesian and the other Vietnamese — are currently being tried in Malaysia for their alleged role in the killing of Kim Jong Nam at Kuala Lumpur's airport in February. Before his death, the half brother, whose existence was known to very few North Koreans, had been living a luxurious life in virtual exile outside of North Korea.

Though attention has been focused on Kim Yo Jong and North Korea's nuclear weapons, Madden said the reshuffle displays a great deal of attention to the North's economy, which has been expanding but could be hit hard by new and tougher sanctions the country is facing.

He said Prime Minister Pak Pong Ju appears to be exercising enormous influence in the appointments of officials he has mentored and said the seeming return of Thae Jong Su, a technocrat who held several key positions until last year, is of note because Thae has "good relations and long-standing ties to China."

North Korea relies heavily on trade with China, but Beijing has been increasing its pressure on Pyongyang to try to ease tensions with Washington.