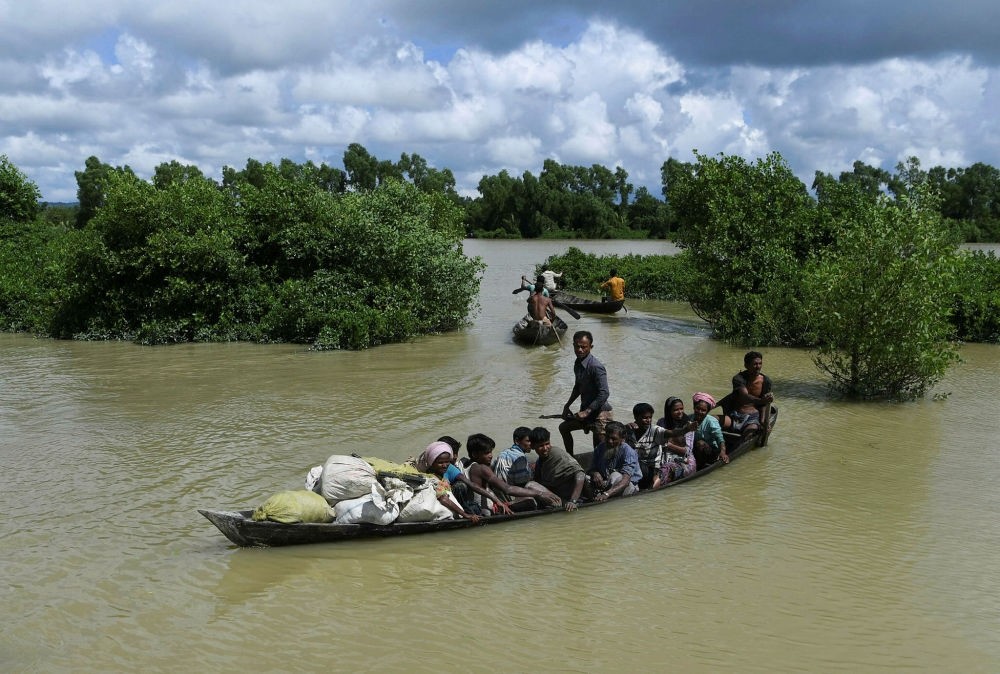 Rohingya refugees arrive on a boat after crossing the Naf river from Myanmar into Bangladesh in Whaikhyang, Oct. 9.
by Compiled from Wire Services Oct 10, 2017 12:00 am

At least 12 Rohingya refugees, most of them children, drowned and scores more were missing after their overloaded boat capsized in the latest tragedy to strike those fleeing violence in Myanmar

An overcrowded boat carrying Rohingya Muslims fleeing Myanmar capsized in the confluence of a river and the Bay of Bengal and at least 12 people died, police said Monday. Five of the dead were children.

Up to 35 people were on the boat and eight survived the capsizing, local police official Mainuddin Khan said. He said rescuers have retrieved 12 dead bodies but it was not exactly clear how many were missing. The search was continuing, but the sea remained rough.

The capsizing occurred near the Shah Porir Dwip in Bangladesh's southern coastal district of Cox's Bazar as the boat was moving toward Bangladesh late Sunday.

In another tragedy last month, at least 23 Rohingya died when their boat overturned near Inani beach close to Bangladesh's Cox's Bazar city.

Around 150 Rohingya, many of them children, have drowned trying to reach Bangladesh in small and rickety fishing boats that coastguards say are woefully inadequate for the rough seas.

Late last month more than 60 refugees are feared to have died when the boat carrying them from Myanmar capsized in rough weather in the Bay of Bengal.

Villagers at Shah Porir Dwip where the boats mostly land told AFP the Rohingya were increasingly travelling at night to avoid strict border patrols in Bangladesh, making the journey even more dangerous.

Last week the guards destroyed at least 30 wooden fishing vessels amid increased concern they were being used to bring the popular methamphetamine drug known locally as Yaba into the country and using the refugee crisis as cover.

Gangs of boat owners, crew and fishermen have also been charging the fleeing Rohingya upwards of $250 for the two-hour journey that normally costs no more than $5.

The United Nations has said the army campaign could amount to "ethnic cleansing" while Myanmar military leaders have blamed the unrest on the Rohingya.

The government of Buddhist-majority Myanmar refuses to recognize the Rohingya as a distinct ethnic group and considers them illegal migrants from Bangladesh.

While the worst of the violence appears to have abated, insecurity, food shortages and tensions with Buddhist neighbors are still driving thousands of Rohingya to make the arduous journey to Bangladesh.

The Bangladeshi authorities initially refused them entry but relented as the numbers became overwhelming, and have set aside land for a giant refugee camp near the border.

The Rohingya, described by the U.N. as the world's most persecuted people, have faced heightened fears of attack since dozens were killed in communal violence in 2012. Last October, following attacks on border posts in Maungdaw district, security forces launched a five-month crackdown in which, according to Rohingya groups, around 400 people were killed.