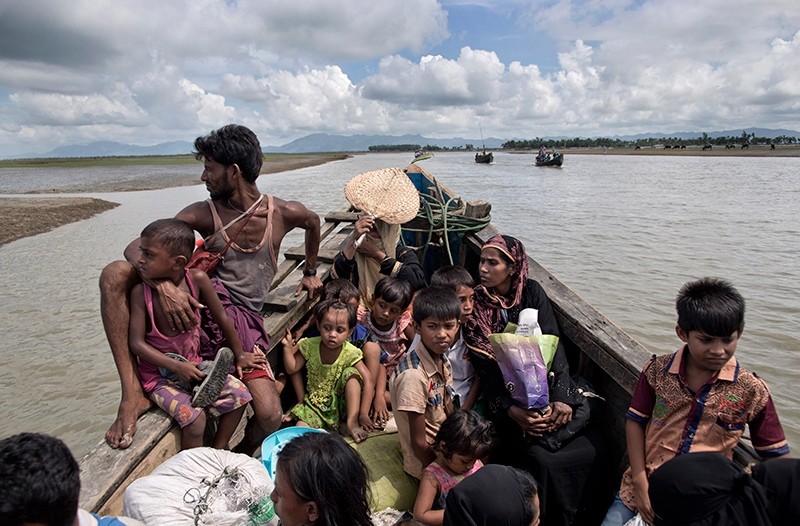 In this Oct. 2, 2017 photo, newly arrived Rohingya refugees on a boat towards a Bangladesh army run processing center where they will be allotted their camp, in Shah Porir Dwip, Bangladesh. (AP Photo)
by Compiled from Wire Services Oct 11, 2017 12:00 am

Myanmar's "systematic" crackdown on the Rohingya is aimed at permanently expelling the minority Muslim community from their home in Rakhine state, the United Nations said Wednesday.

"Brutal attacks against Rohingya in northern Rakhine State have been well-organized, coordinated and systematic, with the intent of not only driving the population out of Myanmar but preventing them from returning to their homes," a U.N. investigation found following interviews with people who have fled to Bangladesh since Aug. 25.

The findings are contained in the first comprehensive report on the crisis in Myanmar's Rakhine State by the U.N. Human Rights Office, after interviews with dozens of people on the ground.

The violence has driven more than 500,000 Rohingya to neighboring Bangladesh since late August, where most live in refugee camps or out in the open.

The report counters the official narrative that the government's security crackdown started only after Rohingya "militants" allegedly attacked security posts in late August, citing evidence that these "clearance operations" started as early as the beginning of the month.

Based on 65 interviews with refugees, as well as information from aid groups, medical personnel, as well as photo and video evidence, the report said that entire villages were burnt down, and that people were executed, raped and tortured.