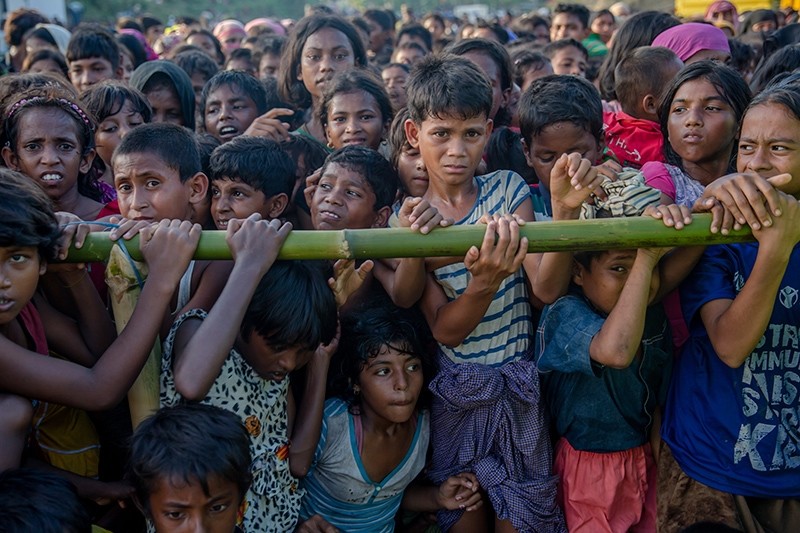 In this Sept. 25, 2017 file photo, Rohingya Muslim children, who crossed over from Myanmar into Bangladesh, wait to receive handouts near Balukhali refugee camp, Bangladesh. (AP Photo)
by Oct 15, 2017 12:00 am

Nearly 14,000 children who have lost one or both parents are among the more than half a million Rohingya refugees who crossed in Bangladesh to escape violence in Myanmar, an official said Sunday.

The U.N. says 536,000 mainly Rohingya refugees have arrived from Myanmar's strife-torn Rakhine state since Aug. 25, the majority of them children.

Bangladesh's social services department said 13,751 children without a parent or parents were identified in a survey of the crowded refugee camps along its border, where charities warn that a humanitarian crisis is unfolding.

"The majority of them said they lost one or both parents in the violence in Rakhine," Pritam Kumar Chowdhury, a department deputy director, told French Press Agency (AFP).

"Others said they didn't know what happened to their parents, and they came to Bangladesh with relatives."

The U.N. has described the violence in Rakhine as a textbook case of ethnic cleansing, with displaced Rohingya Muslims in Bangladesh describing whole villages being razed, gang rapes and massacres.

Those who survived and fled to Bangladesh include an estimated 320,000 children, one-third of whom are under five years of age.

Last month a junior minister asked that 200 acres be set aside in the camp for children's facilities.

Chowdhury said an orphanage would be built for unaccompanied minors, and those without a parent would be given extra assistance and familial support.

Aid agencies have warned there is a real concern that vulnerable children could be victims of abuse or trafficking.