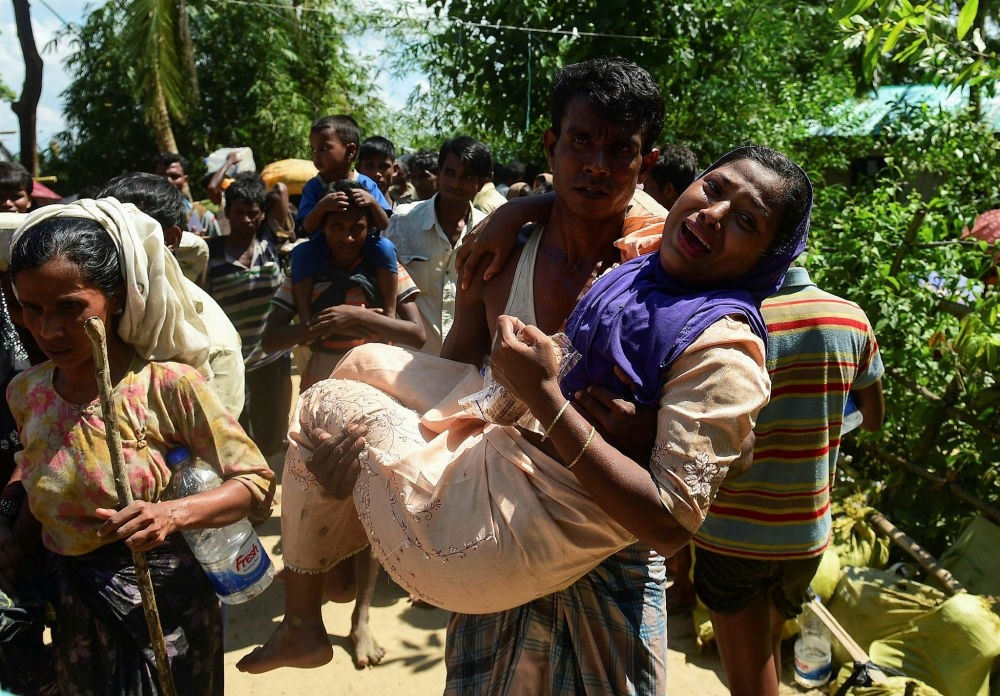 A Rohingya refugee carries his injured relative after crossing the Naf River as they flee violence in Myanmar to reach Bangladesh, Oct. 16.
by Compiled from Wire Services Oct 17, 2017 12:00 am

Nearly 200 Rohingya have drowned in an estuary of the Naf River, which has become a graveyard for dozens of Muslim refugees over the last six weeks

At least 10 people drowned and dozens more are missing after a boat packed with Rohingya fleeing to Bangladesh sank on Monday, as another 12,000 people joined a half-million-strong exodus sparked by an army crackdown in Myanmar. The sinking came about a week after another boat capsized in the estuary on the river, which has become a graveyard for dozens of Muslim refugees.

The boat was carrying an estimated 50 people when it went down in the estuary of the Naf River that divides the two countries, Border Guard Bangladesh area commander Lieutenant Colonel S.M. Ariful Islam told AFP.

The U.N. said over the weekend that 537,000 Rohingya had arrived in Bangladesh over the last seven weeks. They are fleeing violence in Myanmar's Rakhine state, where the United Nations has accused troops of waging an ethnic cleansing campaign against them.

Another 12,000 have entered in the last 24 hours, local border guard spokesman Major Iqbal Ahmed said. "We are keeping them near the border and they will be eventually be taken to the new camps," he told AFP.

Bangladesh has allocated 3,000 acres (1,214 hectares) of forest land to create the world's largest refugee camp for the new arrivals as well as those already in the country. Many of the new arrivals have already occupied the land and built their own makeshift shelters.

Refugees who survived the perilous journey said they were driven out by hunger because food markets in Myanmar's western Rakhine State have been shut and aid deliveries restricted. They also reported attacks by the military and Rakhine Buddhist mobs.

The influx will worsen the unprecedented humanitarian emergency unfolding in Cox's Bazar, where aid workers are battling to provide refugees with food, clean water and shelter.

The Red Cross yesterday opened a field hospital as big as two football fields, with 60 beds, three wards, an operating theatre, a delivery suite with maternity ward and a psychosocial support unit.

Hundreds of thousands of Rohingya had already been in Bangladesh after fleeing previous spasms of violence in Myanmar, where they have long been denied citizenship and faced curbs on their movements and access to basic services.

The U.N. has labeled the Rohingya one of the world's most persecuted religious minorities. Violence erupted in Myanmar's Rakhine state on Aug. 25 when the country's security forces launched an operation against the Rohingya Muslim community. It triggered a fresh influx of refugees towards neighboring Bangladesh, though the country sealed off its border to refugees. The region has seen simmering tension between its Buddhist and Muslim populations since communal violence broke out in 2012.

Last October, following attacks on border posts in Rakhine's Maungdaw district, security forces launched a five-month crackdown in which, according to Rohingya groups, around 400 people were killed. The UN documented mass gang rapes, killings -- including of infants and young children -- brutal beatings, and disappearances committed by security personnel. In a report, U.N. investigators said such violations may have constituted crimes against humanity.