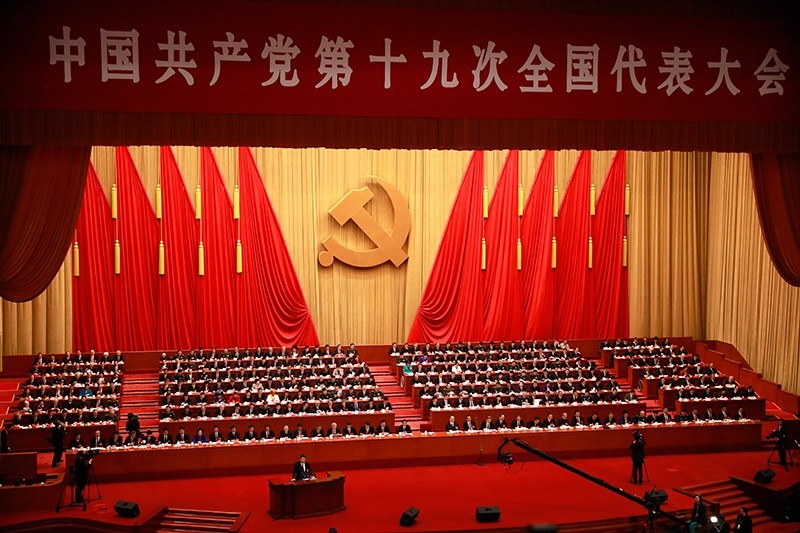 A general view of the hall as Chinese President Xi Jinping delivers his speech during the opening ceremony of the 19th National Congress of the Communist Party of China (CPC) at the Great Hall of the People in Beijing, China, Oct. 2017. (EPA Photo)
by Compiled from Wire Services Oct 18, 2017 12:00 am

Chinese President Xi Jinping on Wednesday urged a reinvigorated Communist Party to take on a more forceful role in society and economic development to better address "grim" challenges facing the country as he opened a twice-a-decade national congress.

Speaking in the massive Great Hall of the People near Tiananmen Square, Xi laid out his vision of a ruling party that serves as the vanguard on everything from defending national security to providing moral guidance to ordinary Chinese.

Xiopened the congress with a pledge to build a "modern socialist country" that will never copy the political systems of others and will remain open to the world.

"Through a long period of hard work, socialism with Chinese characteristics has entered a new era, this is a new historical direction in our country's development," Xi said in a speech carried live across the nation on state television.

China will relax market access for foreign investment and expand access to its services sector, as well as deepen market-oriented reform of its exchange rate and financial system, while at the same time strengthening state firms, he said.

China's political system is the broadest, most genuine, and most effective way to safeguard the fundamental interests of the people, Xi said.

"We should not just mechanically copy the political systems of other countries," he said.

He struck a nationalistic line throughout his speech, calling for the party not only to safeguard China's sovereignty but also to revitalize Chinese culture, oppose "erroneous" ideology and promote religion that is "Chinese in origin."

"The great rejuvenation of the Chinese nation is no walk in the park or mere drum-beating and gong-clanging. The whole party must be prepared to make ever more difficult and harder efforts," Xi told hundreds of delegates, mostly men in dark suits who applauded regularly as they read copies of his prepared remarks. "To achieve great dreams there must be a great struggle."

He added that the party would have to take big risks and overcome "major resistance."

Xi wields undisputed power and is expected to get a second five-year term as party leader at the gathering. Analysts say he has consolidated his power by sidelining his competitors in other intra-party cliques, including those surrounding his immediate predecessor Hu Jintao and former leader Jiang Zemin.

The Communist Party meetings will largely be behind closed doors and are accompanied by extraordinary security measures, such as restrictions on knife sales and greater monitoring of dissidents. But the congress will see powerful players emerge in new roles and is a chance for Xi to publicly lay out his political and economic vision over the next five years.

Xi, in his three-and-a-half-hour address, proclaimed his nation's prospects as bright but made a rare acknowledgement of severe economic challenges.

Other Chinese leaders have regularly warned since the 2008 financial crisis that China's economic growth faces "downward pressure" due to weak global demand that threatens export industries in the world's second-largest economy. But Xi's comments were unusual in a keynote speech meant to highlight the party's confidence and long-range vision.

Among the grave issues Xi said were insufficiently addressed are a widening income gap and problems in employment, education, medical care and other areas.

Xi hailed China's island-building efforts in the disputed South China Sea as well as his signature foreign-policy initiative, the "One Belt, One Road" infrastructure investment project aimed at improving connections between China, Europe and Africa.

He also praised the party's tightened grip over domestic security, saying that social stability had been maintained and national security strengthened.

Xi pledged that the party would have "zero tolerance" for corruption and said it would "continue to purify, improve and reform itself" — an indication that it would not allow outside checks on graft.

Observers will be watching the congress for signs of whether Xi, 64, may be looking to appoint a successor. While the nation's presidency is limited to two five-year terms, the tenure of the party's leader is bound only by tradition.

Xi exhorted party members to resist "pleasure seeking, inaction, sloth and problem avoidance." He drew a hard line on sovereignty, saying that the party must "staunchly oppose all efforts to split China" or to undermine ethnic relations.

To achieve a "moderately well-off society" by 2021 — the 100th anniversary of the party's founding — and even greater national power and prosperity by 2049 — the centenary of the founding of the communist state — China needs continued economic growth and the lifting of millions out of poverty. The country is also rapidly expanding its military and political power, including its growing ability to dominate the Asia-Pacific region.

Xi affirmed economic plans that call for developing state-owned companies that dominate industries including finance, energy and telecoms while also giving the market the "decisive role" in allocating resources.

The party declared for the first time in 2013 that it would give market forces the "decisive role," a step business groups welcomed as a commitment to freer markets. But the same declaration also said the party would play a bigger role in managing state industry, which could blunt the impact of competitive forces.

Excess industrial capacity has strained trade relations with Washington and Europe, which complain that a flood of low-cost Chinese exports is depressing global prices for steel, aluminum and other goods and threatening jobs abroad.

The most tangible results of the congress will likely be personnel appointments.

China is run by the party's Politburo Standing Committee, currently a seven-member body led by Xi, with Premier Li Keqiang his No. 2. While Xi and Li are expected to stay, the fates of others are determined by loose precedents governing retirement age. Four are expected to depart, while the status of party discipline boss and close Xi ally Wang Qishan appears uncertain.

The 2,287 carefully chosen delegates to the congress are drawn from 40 constituencies, including the 31 provincial-level administrative districts, the government, the military, state industries and grass-roots organizations representing most of the party's 89 million members.

In a secret process, they will select a roughly 200-member central committee, along with more than 150 alternates, from a pool of around 400 candidates. The committee will then pick a 25-member politburo and the elite Politburo Standing Committee, led by the general secretary. The makeup of the top body will only be known at the close of the meeting when its members reveal themselves on stage in front of journalists, according to past practice.