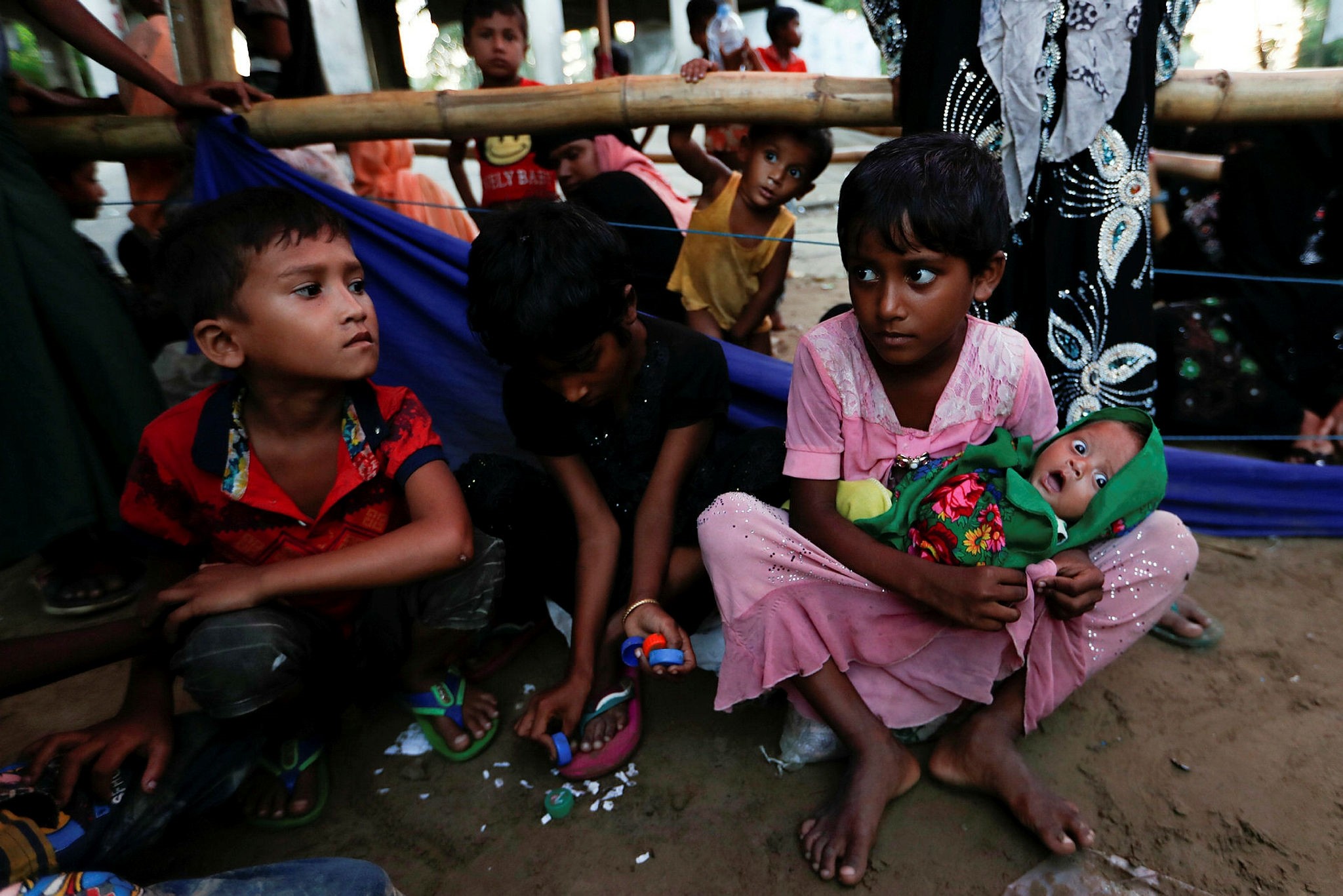 Rohingya refugee children sit as they wait for permission from the Bangladeshi military to continue at a registration center in Teknaf, Oct. 15.
by Compiled from Wire Services
Oct 21, 2017 12:00 am

Rohingya children who have fled violence in Myanmar have been battling malnourishment, disease and mental trauma, in overcrowded refugee camps in Bangladesh, UNICEF warns

Up to 12,000 more children join them every week, fleeing violence or hunger in Myanmar, often still traumatized by atrocities they witnessed, it said in a report "Outcast and Desperate." The report documents the plight of children who account for 58 percent of the refugees who have poured into Cox's Bazar, Bangladesh, over the last eight weeks. Report author Simon Ingram says about one in five children in the area are "acutely malnourished." Ingram also warned of threats posed by human traffickers and others who might exploit children in the refugee areas.

Most Rohingya are stateless in Myanmar and many fled without papers, he said, adding of the newborns in Bangladesh: "Without an identity they have no chance of ever assimilating into any society effectively."

Safe drinking water and toilets are in "desperately short supply" in the chaotic, teeming camps and settlements, Ingram said after spending two weeks in Cox's Bazar, Bangladesh. "In a sense it's no surprise that they must truly see this place as a hell on earth," he said.

The report comes ahead of a donor conference Monday in Geneva to drum up international funding for the Rohingya. The U.N. and humanitarian agencies seek $434 million for the Rohingya refugees - about one-sixth of which would go to UNICEF efforts to help children.

U.N. agencies are still demanding access to northern Rakhine, where an unknown number of Rohingya remain despite U.N. reports that many villages and food stocks have been burned.

"We repeat the call for the need for protection of all children in Rakhine state, this is an absolute fundamental requirement. The atrocities against children and civilians must end," Ingram said. "We just must keep putting it on the record, we cannot keep silent."

"Many Rohingya refugee children in Bangladesh have witnessed atrocities in Myanmar no child should ever see, and all have suffered tremendous loss," UNICEF Executive Director Anthony Lake said in a statement. The refugees need clean water, food, sanitation, shelter and vaccines to help head off a possible outbreak of cholera, a potentially deadly waterborne disease.

In all, almost 600,000 Rohingya refugees have left northern Rakhine state since Aug. 25 when the U.N. says the Myanmar army began a campaign of "ethnic cleansing" following insurgent attacks. The Amnesty's report presents evidence that the Myanmar military has killed at least hundreds of Rohingya women, men, and children, raped and perpetrated other forms of sexual violence on Rohingya women and girls, and carried out organized, targeted burning of entire Rohingya villages. Myanmar rejects accusations of ethnic cleansing and has labeled the Rohingya militants who launched the attacks as terrorists. U.N. aid agencies have not had access to the shrinking Rohingya population in Rakhine state and the United Nations says Rohingya there now face a "desperate choice whether to stay or go," not only due to the violence but also humanitarian needs.