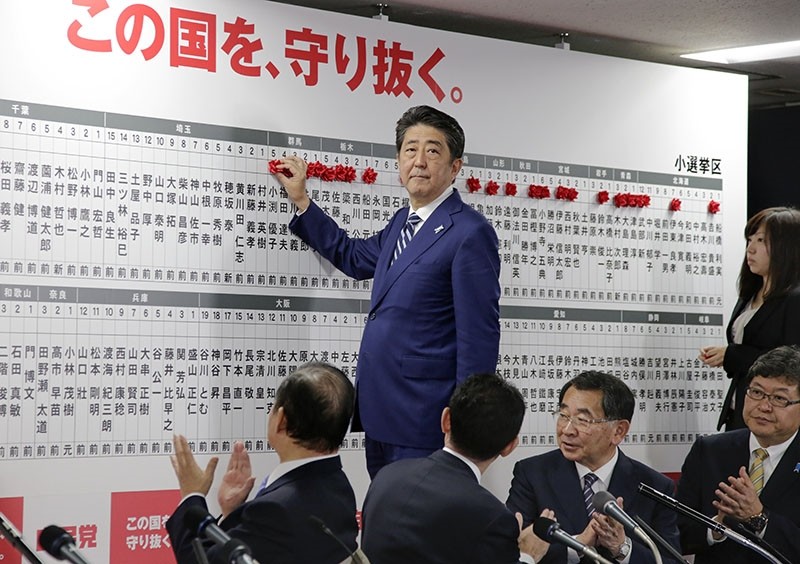 Japanese PM Shinzo Abe (C-Standing) puts a red rose on name of a party's candidate to be elected in the Lower House election as party's senior members applaud at headquarters of the ruling LDP in Tokyo, Japan, Oct. 22, 2017. (EPA Photo)
by Associated Press Oct 22, 2017 12:00 am

Japan's ruling coalition appeared headed to an impressive win in national elections on Sunday, in what would represent at least a partial comeback for Prime Minister Shinzo Abe.

A victory would boost Abe's chances of winning another three-year term next September as leader of the Liberal Democratic Party. That could extend his premiership to 2021, giving him more time to try to win a reluctant public over to his longtime goal of revising Japan's postwar pacifist constitution.

In the immediate term, a victory likely means a continuation of the policies Abe has pursued in the nearly five years since he took office in December 2012 — a hard line on North Korea, close ties with Washington, including defense, as well as a super-loose monetary policy and push for nuclear energy.

Japanese media projected shortly after polls closed that Abe's LDP and its junior partner Komeito would win a clear majority and might even retain their two-thirds majority in the lower house of parliament.

In early results, the ruling coalition had won 224 seats in the 465-seat lower house, and other parties had 91 seats, Japanese public broadcaster NHK reported. Complete results may not be tallied until Monday.

Abe's support ratings had fallen to around 30 percent in the summer, sparking talk that he might be vulnerable as leader of his party and prime minister.

Abe dissolved the lower house less than a month ago, forcing the snap election. The lower house chooses the prime minister and is the more powerful of the two chambers of parliament.

Analysts saw Abe's move as an attempt to solidify his political standing at a time when the opposition was in disarray and his support ratings had improved somewhat.

His plan was briefly upstaged by the launch of a new opposition party by populist Tokyo Gov. Yuriko Koike, but initial excitement faded and Koike herself decided not to run for parliament.

NHK projected that her Party of Hope would win just 38 to 59 seats.

Koike called the results "very severe" in a televised interview from Paris, where she is attending a conference of mayors. She said some of her remarks might have been taken negatively by voters, and that she would take the blame.

Abe's party and its nationalist supporters have advocated constitutional revisions for years. They view the 1947 constitution as the legacy of Japan's defeat in World War II and an imposition of the victor's world order and values. The charter renounces the use of force in international conflicts and limits Japan's troops to self-defense, although Japan has a well-equipped modern military that works closely with the U.S.

Any change to Japan's constitution, which has never been amended, requires approval first by two-thirds of parliament, and then in a public referendum. Polls indicate that the Japanese public remains opposed to amendment.