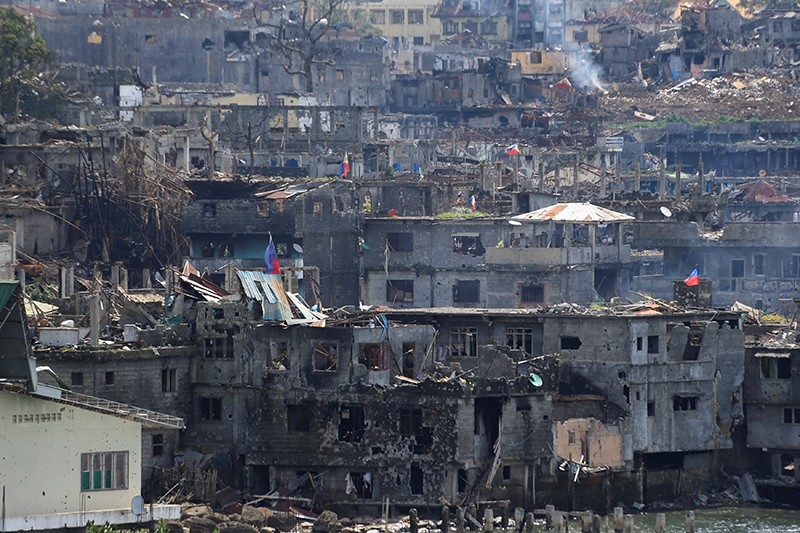 A five-month battle against Daesh terrorist supporters in the southern Philippines that claimed more than 1,000 lives has ended, the nation's defense secretary said Monday.

"We now announce the termination of all combat operations in Marawi," Defense Secretary Delfin Lorenzana told reporters on the sidelines of a regional security meeting in Clark, a northern Philippine city.

The fighting has left at least 1,131 people dead, including 919 militants and 165 soldiers and policemen. While the fighting raged at noon on Sunday, troops continued to us loudspeakers to ask the gunmen to surrender.

Military chief of staff Gen. Eduardo Ano said Sunday some of the remaining militants were "suicidal."

Hundreds of militants, many waving Daesh terrorist flags, launched the siege on May 23 in Marawi, by seizing the lakeside city's central business district and outlying communities. They ransacked banks and shops, including gun stores, looted houses and smashed statues in a Roman Catholic cathedral, according to the military.

At least 1,780 of the hostages seized by the militants, including a Roman Catholic priest, were rescued, and a final group of 20 captives were freed overnight, Brawner said. That left the gunmen with none of the hostages they had used as human shields to slow the military advance for months.

The disastrous uprising, which has displaced hundreds of thousands of Marawi residents, erupted as the Philippines was hosting annual summit meetings of the Association of Southeast Asian Nations this year, along with the 10-nation bloc's Asian and Western counterparts, including the United States and Australia. The two governments have deployed surveillance aircraft and drones to help Filipino troops rout the Marawi militants.