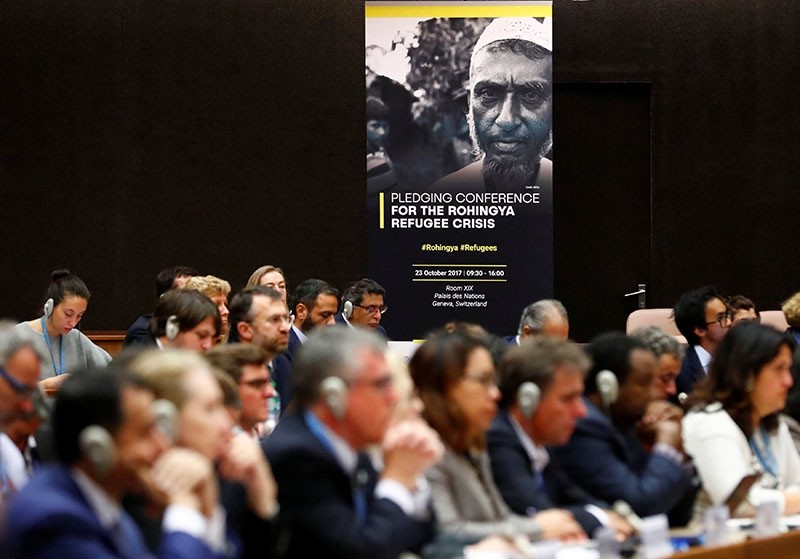 Leaders meet to pledge funds to Rohingya in Bangladesh at United Nations conference in Geneva, Switzerland (Reuters Photo)
by Daily Sabah with Agencies Oct 23, 2017 12:00 am

The Geneva meeting hosted by the European Union, the government of Kuwait and the U.N.'s migration, refugee and humanitarian aid coordinating agencies aims to help meet a U.N. call for $434 million in funding through February.

The sum is calculated to fund U.N. operations in Bangladesh, which has kept its borders open to nearly 600,000 Rohingya, despite being one of Asia's poorest countries.

Refuges in Bangladesh face food and water shortages, as well as lack of shelter and sanitation facilities, raising the risk of disease outbreaks.

Mark Lowcock, head of the U.N. Office for the Coordination of Humanitarian Affairs, lamented the "humanitarian and human rights nightmare" faced by the Rohingya refugees in Bangladesh, saying the main focus of the event was "mobilizing resources to save lives and protect people."

OCHA spokeswoman Vanessa Huguenin said that as of Monday, international commitments sought since the start of the crisis have reached only 26 percent of the U.N.'s total funding target for the six-month period.

Beyond appealing for funds, U.N. leaders urged the international community to get involved to stop the violence and discrimination.

"This is not an isolated crisis," Lowcock said, pointing to decades of "persecution, violation and displacement."

The Rohingyas, described by the U.N. as the world's most persecuted people, are a marginalized Muslim group in Buddhist-majority Myanmar. Besides extreme poverty, they have faced heightened threats of attack since dozens were killed in communal violence in 2012.

In late August, Myanmar security forces launched an operation against attacks by Rohingya militants in Rakhine. U.N. human rights investigators have concluded that the burning of villages, persecution of community leaders as well as killings and rapes amount to a systematic effort to drive out the Rohingyas.