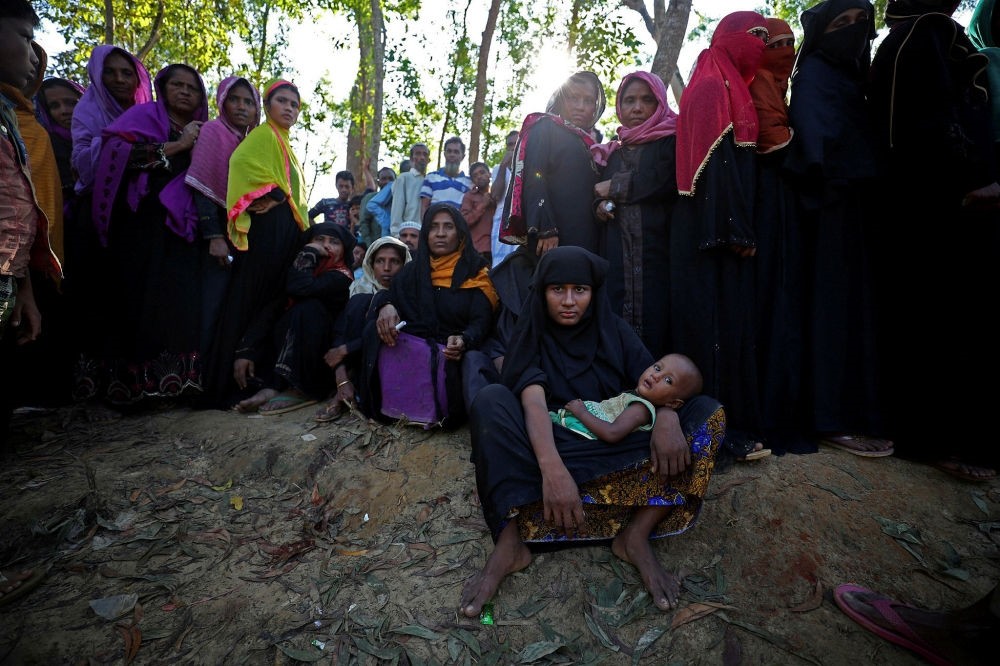 Rohingya refugees line up to receive humanitarian aid at the Kutupalong refugee camp near Cox's Bazar, Bangladesh, Oct. 23.
by Compiled from Wire Services Oct 24, 2017 12:00 am

Nearly 1 million Rohingya refugees have fled violence in Myanmar, as the world faces the fastest-growing refugee crisis unfolding in Myanmar and Bangladesh.

"This is the biggest exodus from a single country since the Rwandan genocide in 1994," Shameem Ahsan, Bangladesh's ambassador to the United Nations in Geneva, told a U.N. pledging conference.

"Despite claims to the contrary, violence in Rakhine state has not stopped. Thousands still enter on a daily basis," he said.

Bangladesh's interior minister was in Yangon on Monday for talks to find a "durable solution," Ahsan said.

But Myanmar continued to issue "propaganda projecting Rohingyas as illegal immigrants from Bangladesh," Ahsan said, adding: "This blatant denial of the ethnic identity of Rohingyas remains a stumbling block."

The Geneva meeting hosted by the European Union, the government of Kuwait and the U.N.'s migration, refugee and humanitarian aid coordinating agencies aims to help meet a U.N. call for $434 million in funding through February.

Refugees in and around the Bangladeshi fishing town of Cox's Bazar have faced food and water shortages, lack of shelters and inadequate sanitation facilities, raising the risk of disease outbreaks. Nearly six out of 10 refugees are children, many of them arriving malnourished. "It's a pretty grim situation," U.N. refugee chief Filippo Grandi said. "The needs are massive."

The president of the medical aid group Doctors Without Borders, Joanne Liu, described the chaos and suffering she saw during a recent visit to a refugee camp, where children get lost on their way to collect water, while adults collapse because of dehydration. "The camp is a time bomb ticking toward a full-blown health crisis," she warned.

Amnesty's report presents evidence that the Myanmar military has killed at least hundreds of Rohingya women, men, and children, raped and perpetrated other forms of sexual violence on Rohingya women and girls, and carried out organized, targeted burning of entire Rohingya villages. Myanmar rejects accusations of ethnic cleansing and has labeled the Rohingya militants who launched the attacks as terrorists. U.N. aid agencies have not had access to the shrinking Rohingya population in Rakhine state and the United Nations says Rohingya there now face a "desperate choice whether to stay or go," not only due to the violence but also humanitarian needs.