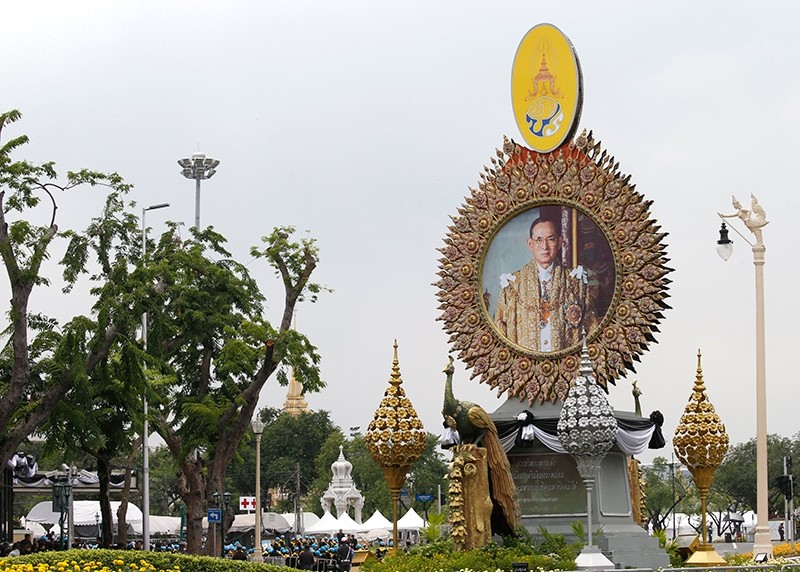 Thailand on Wednesday began an elaborate five-day funeral for King Bhumibol Adulyadej with his son, the new monarch, performing Buddhist merit-making rites in preparation for moving Bhumibol's remains to a spectacular golden crematorium.

Thousands of mourners dressed entirely in black have endured tropical heat during the day and torrential rains at night as they waited to enter the historic royal quarter of Thailand's capital to bid farewell to a monarch celebrated as a unifying symbol throughout his seven-decade reign.

The rites in the ornate throne hall of Dusit palace, where Bhumibol's remains have been kept for the past year, began the series of ceremonies and processions that include his cremation on Thursday evening within a golden edifice representing mystical Mount Meru, where Buddhist and Hindu gods are believed to dwell.

About 250,000 people are expected to line the streets of Bangkok's royal quarter to witness elaborate gilded processions that will be broadcast live.

As orange-robed monks chanted and officials in crisp white uniforms looked on, King Maha Vajiralongkorn knelt beneath a nine-tiered golden umbrella. The ceremony was preparation for the moving of an urn representing Bhumibol's remains to the crematorium built over the past year.

By tradition, deceased Thai royals have been kept upright in elaborate urns during official mourning. But Bhumibol, who spent much of his early life in the West, opted to be put in a coffin, with the urn placed next to it for devotional purposes.

Bhumibol's death at age 88 on Oct. 13 last year sparked a national outpouring of grief and a year of mourning. More than 12 million people — nearly a fifth of Thailand's population — visited the throne hall at Dusit palace to pay respects.

The adulation Bhumibol inspired was in part the result of decades of work by palace officials to rebuild the prestige of the monarchy, which lost its mystique and power after a 1932 coup ended centuries of absolute rule by Thai kings.

That effort built an aura of divinity around Bhumibol, who was also protected from criticism by draconian lese majeste laws, but the king was also respected for his charitable work, personal modesty and as a symbol of stability in a nation frequently rocked by political turmoil.

One mourner, Banterng Saeuong, said Wednesday that the funeral was the most important event in his lifetime. "I am happy to stand in the rain or sit under the sun," said the 55-year-old.

The funeral will be an intensely somber event, but also rich in history and cultural and spiritual tradition.

Mourners are allowed to prostrate when royal processions pass but must not shout out "Long Live the King" or hold up cellphones to take photos or selfies.

Police are trying to calm occasional flare-ups of tension among mourners.

There have been accusations of queue jumping and sharp exchanges between some who've waited hours or traveled from far away.

Volunteers handed out water to offset the tropical heat as the crowd slowly moved through security checks into the historic royal quarter.

Portraits of King Bhumibol were held by many in the crowd, and some wore plastic raincoats during the heaviest rains overnight — the only bits of color breaking up the sea of black as the crowds grew.

Yuwadee Tyler said she had come from Hobart, Australia, where the Thai woman has lived for more than a decade.

"When I know my king is passed away, my heart is broken," she said. "I am so glad to be here."