Singapore to freeze number of cars on its roads 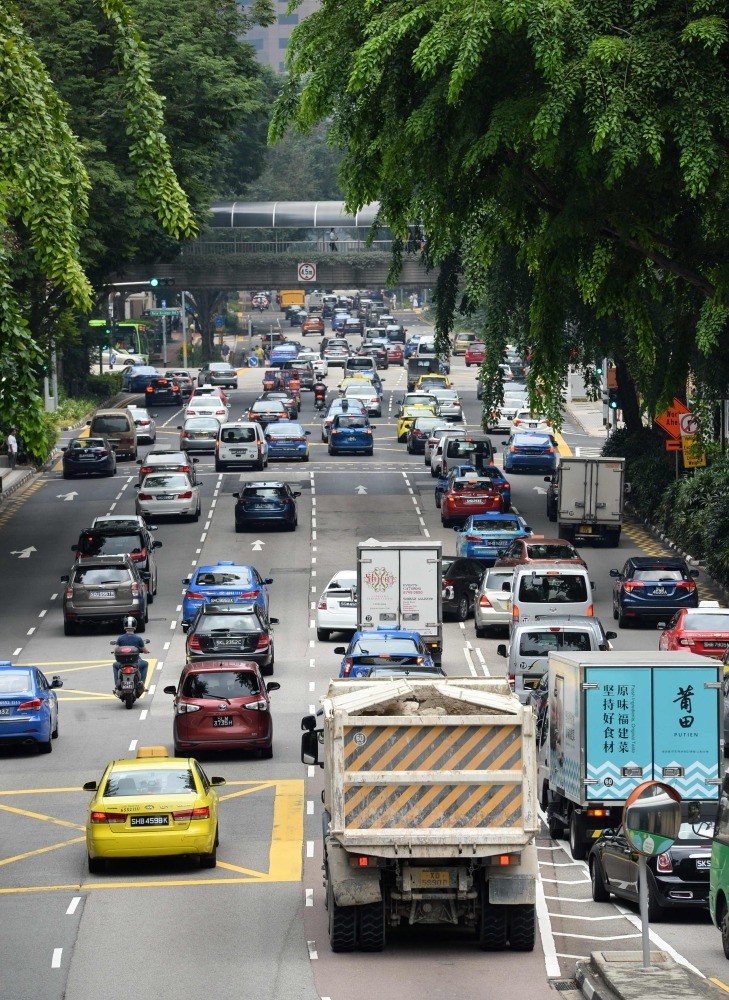 Motorists enter the financial district area in Singapore. The country is one of the most expensive places in the world to buy a vehicle.
by Oct 25, 2017 12:00 am

Singapore, one of the most expensive places in the world to buy a vehicle, will freeze the number of private cars on its roads for at least two years, a rare move in Asia where many cities are increasingly gridlocked. The city-state said the growth cap for all passenger cars and motorcycles will be cut to zero from 0.25 percent a year in February, while pledging a new multi-billion-dollar investment in the public transport network. The measure, to be reviewed in 2020, is an extension of Singapore's already tough controls on vehicle ownership, which have helped the nation of 5.6 million avoid the traffic jams that choke other Asian cities.

As well as controlling the number of vehicles on the roads, special certificates valid for 10 years must be purchased along with a car, pushing the price of an average sedan to over Sg$110,000 ($80,000) - about four times the price in the U.S. Nevertheless many have still paid the hefty price for the convenience of having their own vehicle. There were more than 600,000 private cars in Singapore at the end of 2016. Singapore's approach is rare in Asia where the blistering pace of urban development in recent decades has often been accompanied by unchecked growth of car and motorbike ownership, spawning huge traffic jams in many major cities.

The capitals of Indonesia and Malaysia, Singapore's two closest neighbours, both suffer serious gridlock on an almost daily basis, with poor public transport systems an unattractive option and many residents viewing car ownership as a status symbol. In Philippine capital Manila, the Japan International Cooperation Agency estimates the cost of traffic to the economy as equivalent to four percent of GDP. However, not everyone in Singapore welcomed the move. Some said the public transport system, which has faced criticism recently after the metro suffered a series of breakdowns, needed improvement to justify such a step, and others that it would push up the price of cars as experts predicted certificates would become more expensive.

"This is a totally flawed move. It basically means that only the rich can afford to own a car in future," said Facebook user Winson Tan.

"We have already reclaimed whatever land we can without pushing into deeper waters or into territories that are disputed," he told AFP. While Singapore remains one of the most expensive cities to live in partly due to high car prices, Song said the city-state has also avoided "horrendous" traffic jams seen elsewhere.

"It may not be the cheapest place to live and work but the quality of life is what people are looking at." In a statement announcing the change Monday, the Land Transport Authority (LTA) said 12 percent of Singapore's total land area was already taken up by roads and there was limited room for expansion. But it said the government would spend Sg$28 billion over the next five years to expand and upgrade public transport. The city-state has a largely efficient public transport system, including buses, trains and a metro. Some hoped that the changes would encourage Singaporeans to use more environmentally friendly forms of public transport in future. "Time for us to cycle more," Jia Wang wrote on LTA's Facebook page.